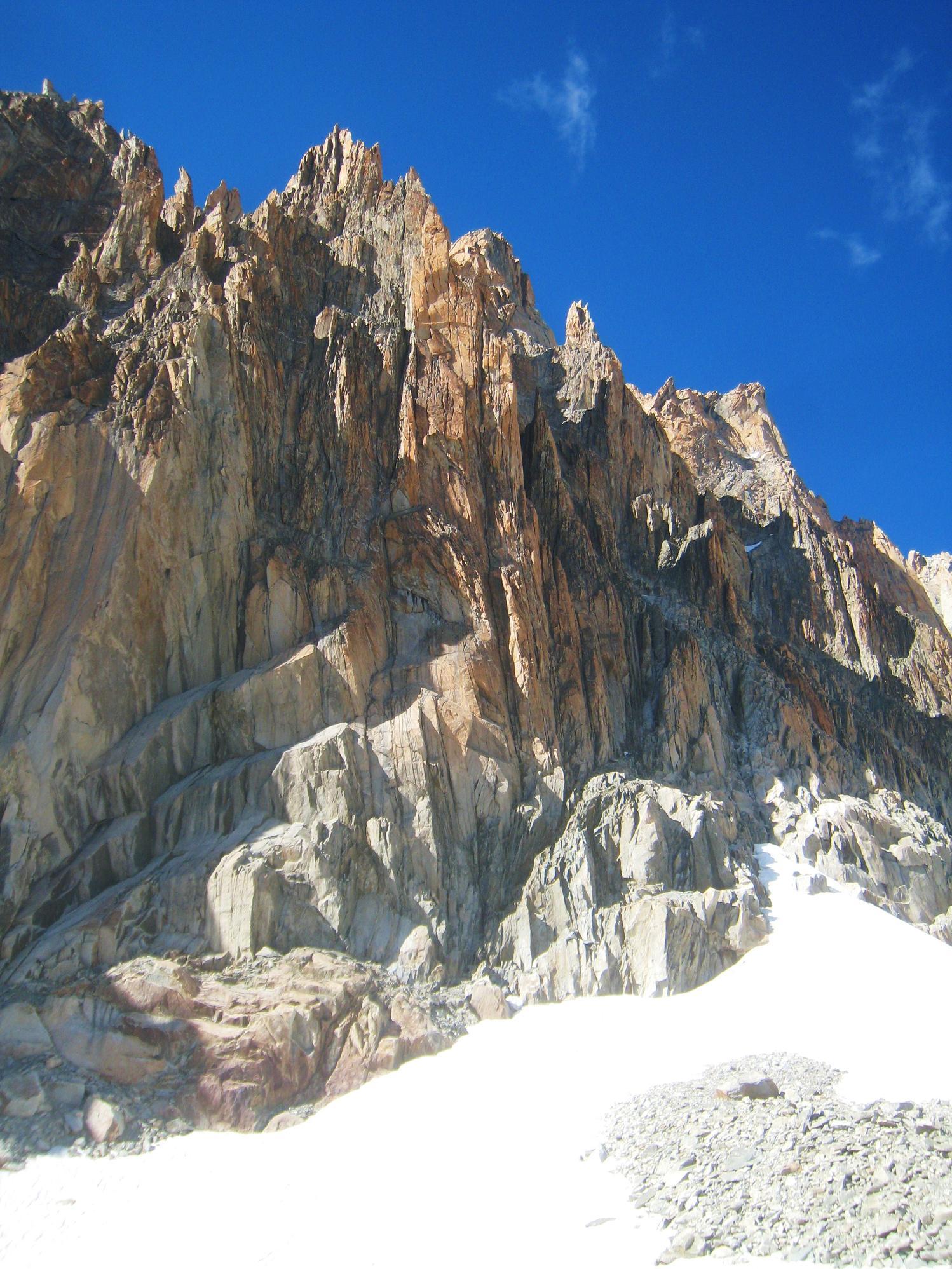 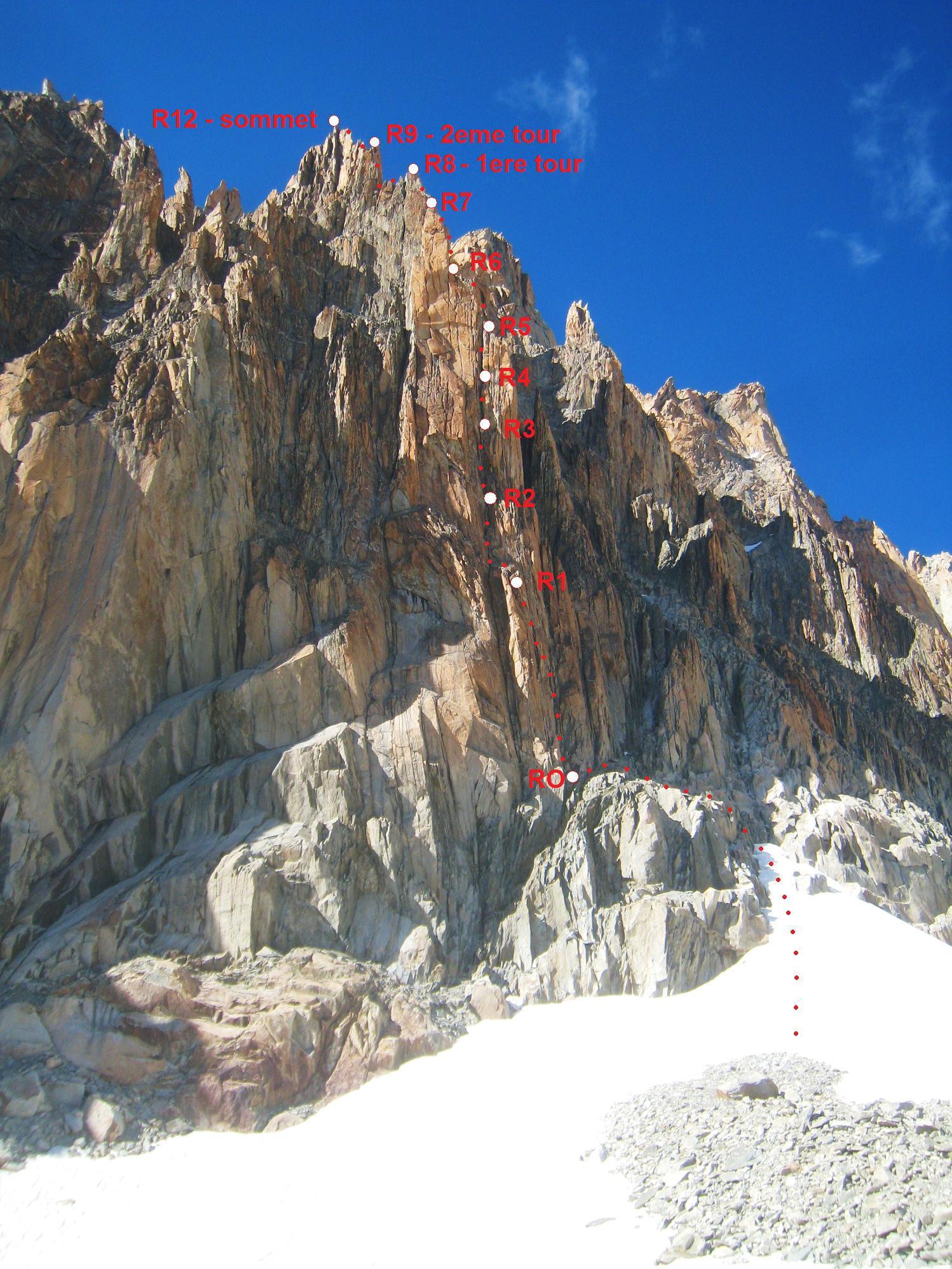 Superb montagne route taking a logical line, classic Rébuffat. It seems much longer than its 300m height gain. Sustained and strenuous climbing at 5b, some of moves of 5c and a harder section, but with pegs, (6a-b/A0).
The route is in three parts. For the first tower you mainly follow the groove to the right of the S face. The second tower has a long and very sustained pitch and then to reach the summit you mainly follow the crest of the SE spur.

From the Argentière hut, follow the moraine of the Améthystes glacier until level with the Minaret. Go up the snow towards the right end of a large ledge at the foot of the cliff.

1st Tower Identify the large groove in the right side of the face and get as near as you can to it by following the large ledge. The start is at a corner leading to a detached pinnacle. On the left of this corner is a large detached flake.

L# | 4c| 45m | Climb the corner, fairly easy, then trend to the left towards the large detached flake. Go over it and climb a smooth corner until a large jammed block, (abandoned friend) which is bypassed to the left. Bypass a second jammed block (another abandoned friend) on the right to reach the belay, (slings) on a ledge next to the large groove. L# | 5a| 45m | Gain the foot of the groove and climb it, a smooth corner then easier runnels until you come to an overhang. It is also possible to stay on the left of the groove in the runnels (pegs) but the rock is not as good. Belay on a bolt and pegs. L# | 5b|30m | Turn the overhang on the left, (moving peg) then come back to the groove to climb the nice, easier runnels, go past a jammed block to a belay (2 pegs) at the foot of broad, dark chimney. L# | 5b |20m | Climb the chimney, (either by old fashioned chimneying or by the runnels on the left, harder to find protection,) and after a steep passage, (good holds) gain a ledge. Belay on pegs. L# | 5c | 45m | Follow the chimney with the help of some nice cracks and runnels on the left, (2 pegs) to the top of the groove. Reach a comfortable ledge in the sun at the shoulder of the first tower. Belay on slings. L# | 3b |30m | Climb the shoulder keeping to the right of the crest until you reach a nice corner. Belay on pegs and slings. L# | 5b|45m | Climb the corner, (belay bolts of “Rasta Metal” just to the right), then go up a series of steep cracks and runnels (peg) until the angle eases on rejoining the crest of the spur. Belay on a peg and a sling at the foot of a steep wall. L# | 4b| 30m | Turn the wall on the right, (another bolt belay of “Rasta Metal” to the right) and go up to the summit of the first tower. Belay on slings around a very large rock spike. 2nd Tower Descend into the gap using little flakes for protection. Belay on a very large flake. L# | 6a/b > A0| 45m | Directly above the belay, steep runnels (2 pegs) then a little overhang with good holds (peg). It is steep and worth 6a/b free, but goes at A0. Follow logically the nice runnels (pegs) and a steeper crack. A difficult mantleshelf on a rounded ridge leads to the top of the 2nd tower. Belay on slings and pegs. Summit Tower Descend into the gap and belay on a spike at the foot of a detached pinnacle. L# |4c |35m | Climb down for 5/6m to the right edge of the detached pinnacle and traverse to reach a wide corner, beware of rope drag. Climb the corner to get onto a superb slab which you climb to the crest of the spur. Belay on pitons. L# | 5b |35m | Go to the other side of the spur (peg), climb a smooth but short corner, then a steep corner and traverse to the right. Climb a wall with nice flakes and an awkward rounded mantleshelf. Belay on pegs. L# | 6a|40m | Climb the large blocks above the belay, traverse towards and climb a layback corner. The start is very smooth and is a good 6a without “a shoulder”. Gain a broad ledge at the foot of a large block. An awkward mantleshelf, difficult to protect, to reach the summit.

Abseil back down the route (beware of the rope snagging) until the last belay of “Rasta Metal” (just under the top of the first tower). Then abseil down “Rasta Metal” (solid abseil points with two bolts or a bolt and a peg.)

Credit to the first ascentionists and also to those of Rasta Metal.