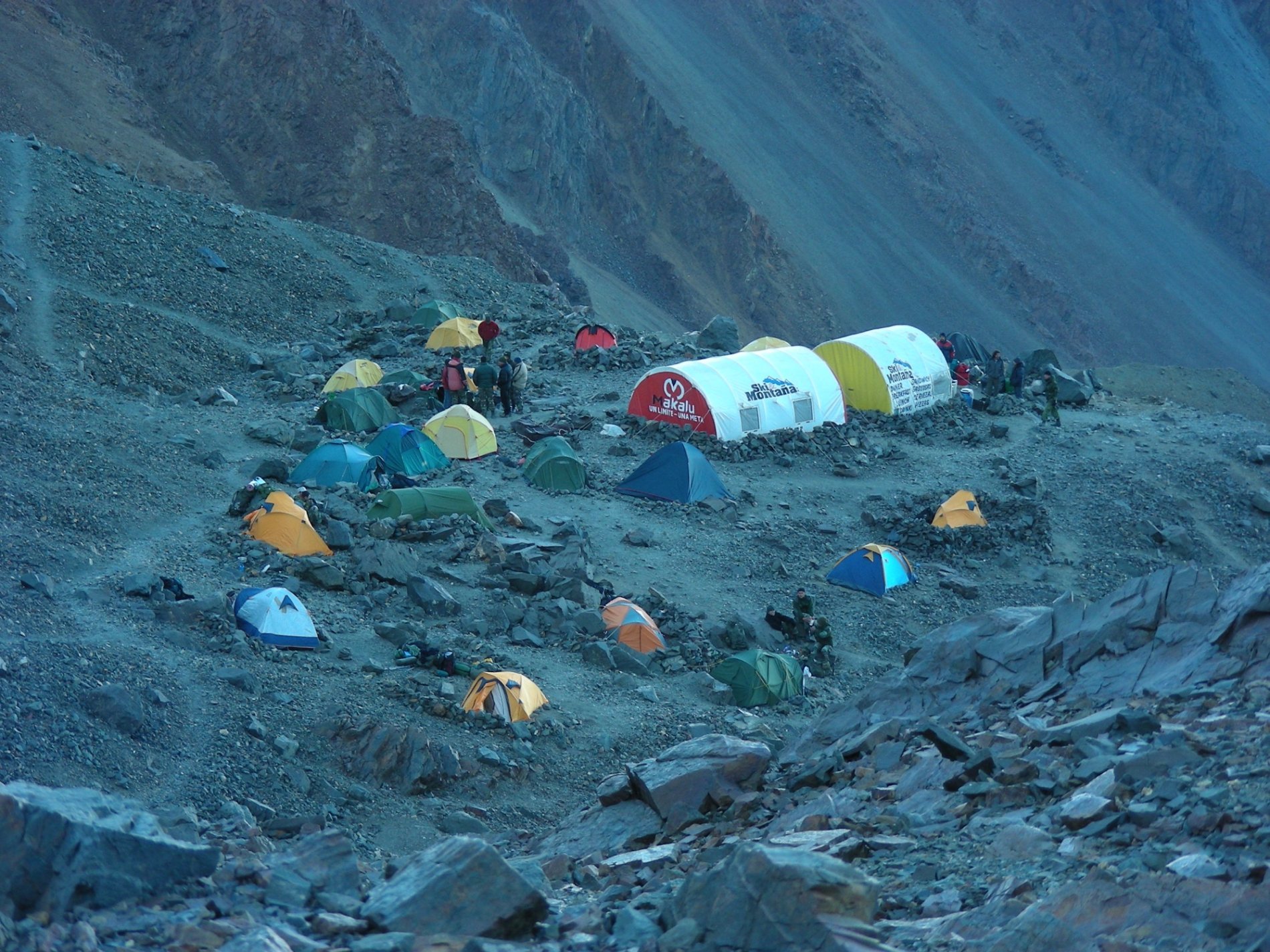 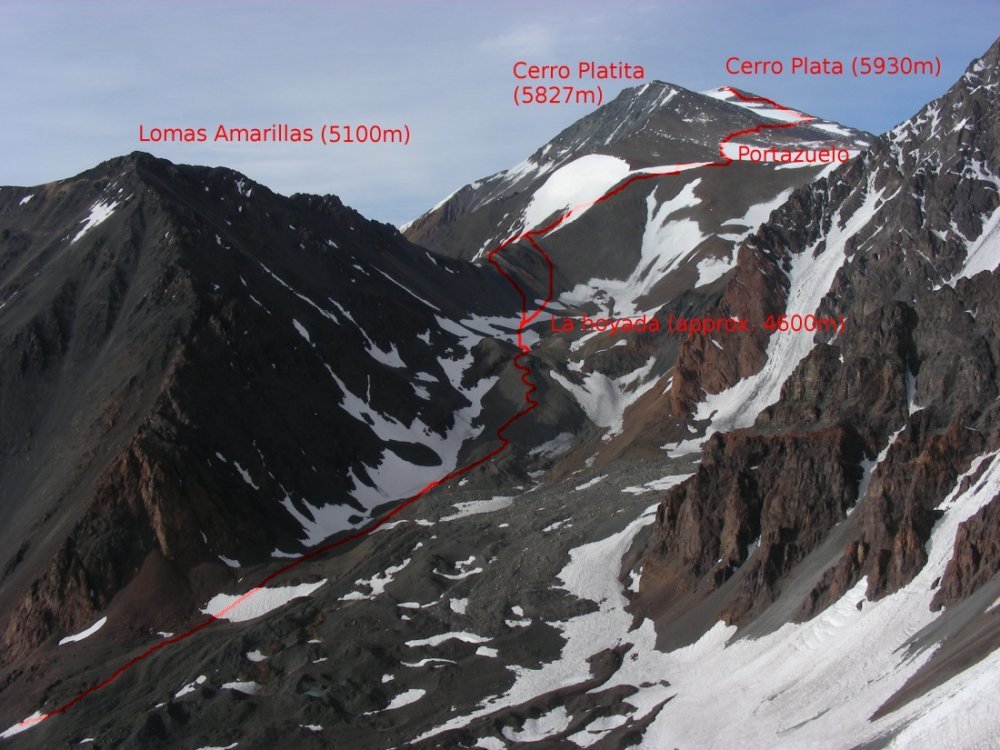 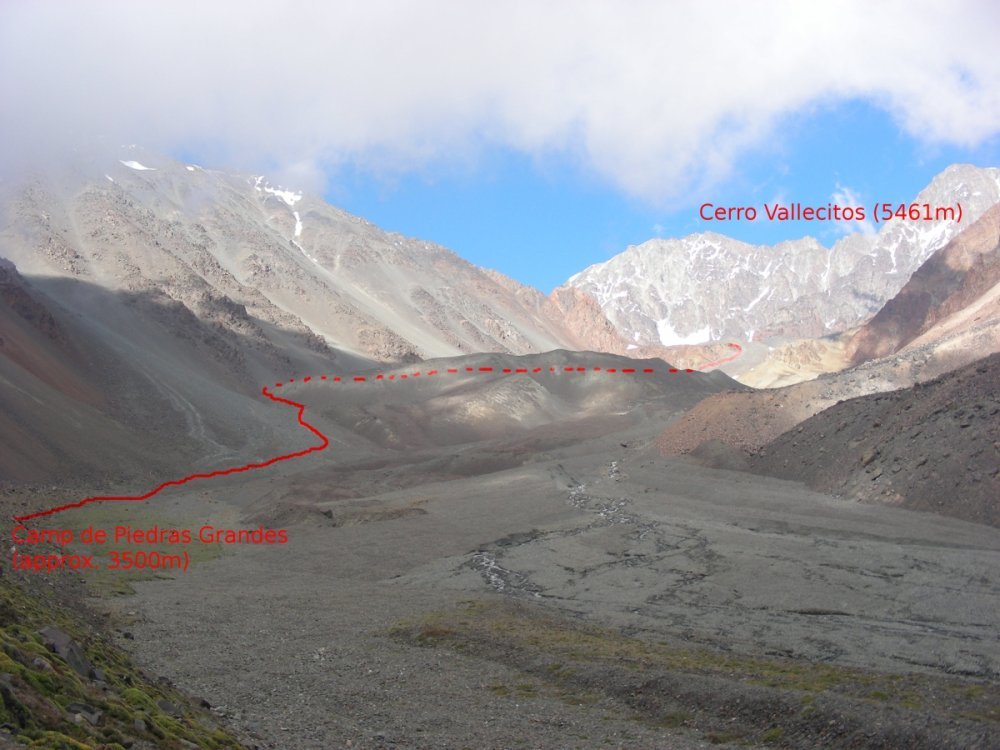 Access to the summit is via successive camps, set along the valley. Among these, the most popular are “Las Veguitas” (approx. 3200m, confortable lawn and water available), “Piedras Grandes” (approx. 3500m), “Salto del Agua]” (approx. 4300m) and “la Hoyada” (approx. 4500m). A large tent is used as a “refuge” in Salto del Agua during summer and offers food to weary climbers. It is well located close to water sources (above the camp, crossing a snow patch there is a small stream and waterfall). For this reason, it is often the last one. It does impose some 1600m of climbing for the summit day.

From Vallecitos, follow the roads and then the mule paths along the stream to the W of the ski resort. Reach Las Veguitas. From there, follow the trail between the two main streams (visible from Las Veguitas) or to the S of the southern-most one. Terrain is easy and you can easily make progress off-trail.

You will have to go up the old moraine to the W of Las Veguitas. Once on the top of the moraine, the path goes through Piedras Grandes (at the base of Cerro Franke) which you will recognize by its large rocks and stone walls (used to protect tents from fierce catabatic winds coming down the valley: use them!). If you stayed in between the two streams when coming from Las Veguitas, you will arrive at a wide stream bed of braided channels. A good path follow the S side of the channels and close to Piedras Grandes, water is available from a source (the one in the stream is very silty).

From Piedras Grandes, follow the good trail towards Salto del Agua. It goes up two moraine fronts. The first one is short and easy to negotiate. The second one is longer and has more loose rock (it is called “infernillo” = little hell, a well deserved name).

Salto del Agua is set atop some yellow/orange cliffs which you can see while going up the second moraine front. The path goes around the cliff on the right.

The summit sees a lot of visitors and you should have no problem finding the route (obvious exceptions are fog and recent snowfall). From Salta del Agua, follow the main path above the camp to the E until you reach a glacial basin or cirque below the S faces of Vallecitos] and Rincon] (named “glaciar de la Hoyada” on the Aoneker map). You will most likely find some snow here. The path does not enter the glacier.

From there, you have two equivalent options for reaching the ridge between Lomas Amarillas (E) and the portazuelo which links “Platita” and Vallecitos (W). The path on the left is steeper and leads you to a high camp (approx. 4700m, very exposed to the wind). The path to the right is more gentle and stays out of the wind longer. Once on the ridge, follow it towards the SW until the path turns NW and stays under the portazuelo between Platita (or pico plata) and Vallecitos until reaching it where it is least steep (at approx. 5000m).

Once on the portazuelo, you will see the W side of the Cordon del Plata and the wind will probably be strong. If tired or conditions are uncertain, you can choose to go N to Vallecitos] (5461m).

For Cerro Plata, follow the path towards the SW. There are often some easy snow patches below Cerro Platita (not steep but can be very hard snow: take crampons just in case). The path goes around cerro Platita, on its N side. The path then takes you to the NW ridge of Cerro Plata and goes up towards the summit with numerous switch-backs. You can see the summit and there are only some 300m left… but they will take you a while. The path is quite steep and has some loose scree. You will pass an helicopter wreck (on your left). The summit is flat and has a few crosses on it.

Same way. Beware of the fog for finding the exit to the portazuelo.

Depending on who you ask, you will get very different quotes for the summit’s altitude. IGM says it is 6300m (but no one believes that). Many state 6100m (and believe it!). Most agencies sell it for 6000m while various sources give 5930m or 5950m.

Whatever the details are, it is high enough to require a proper acclimatization strategy.