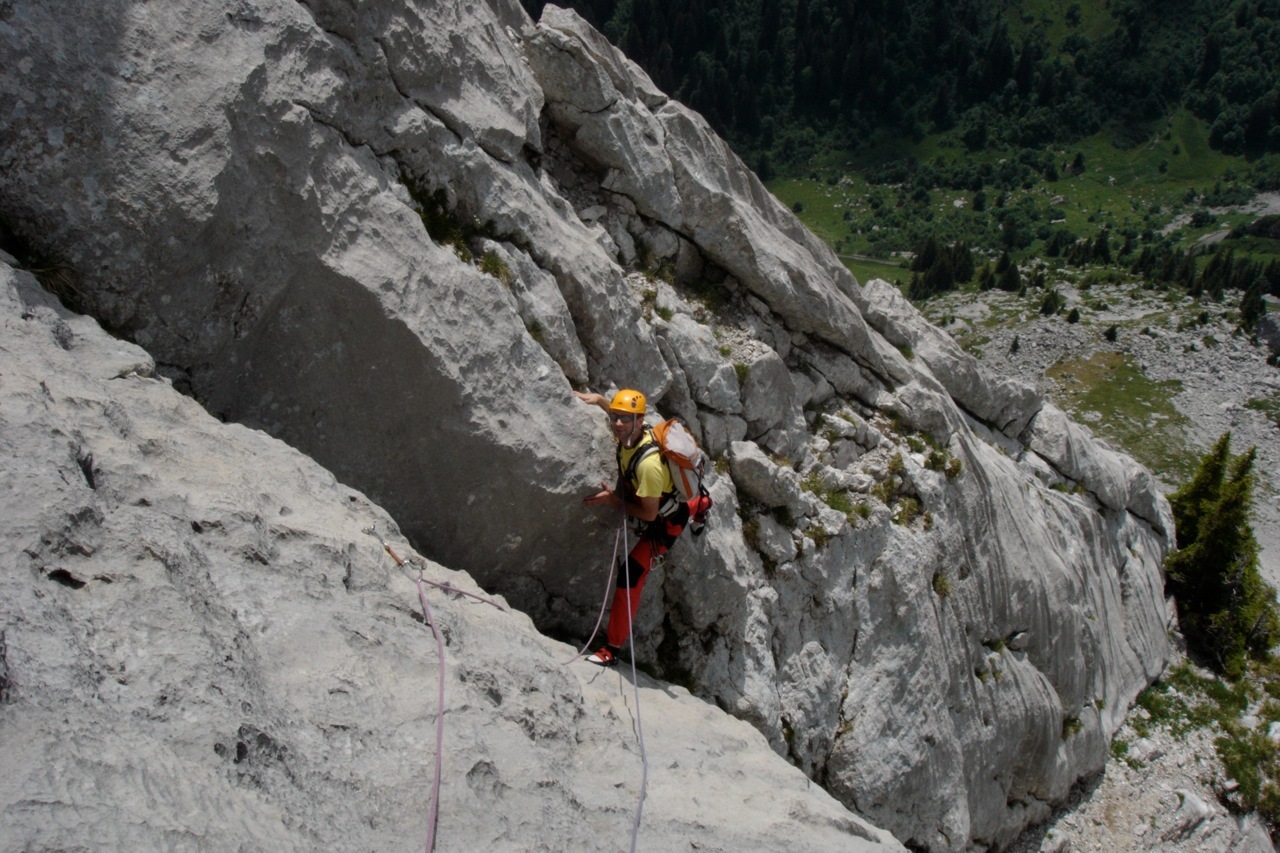 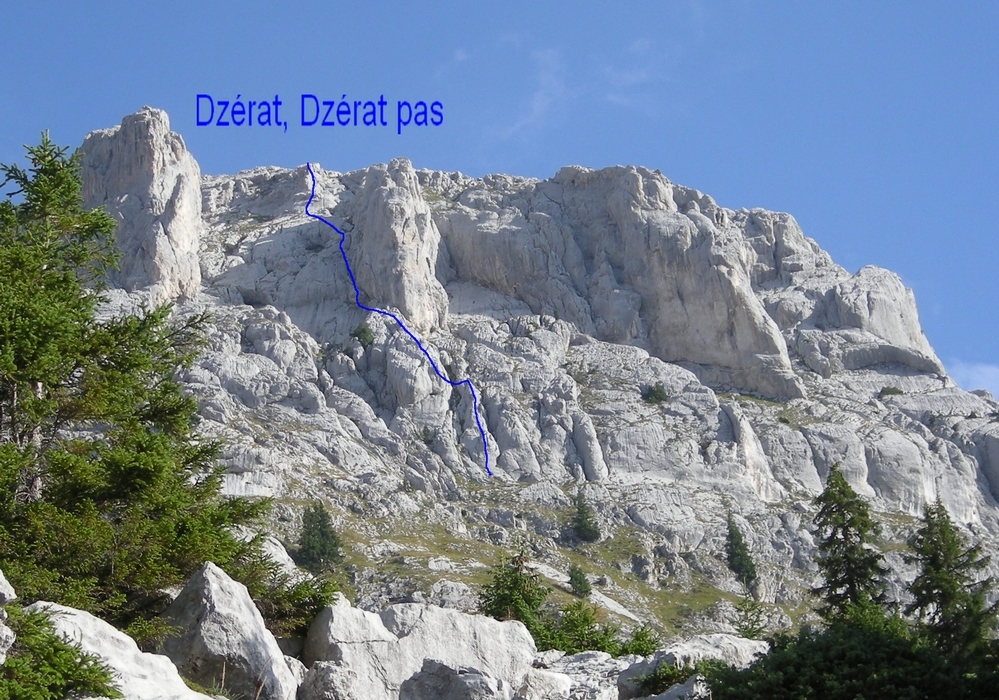 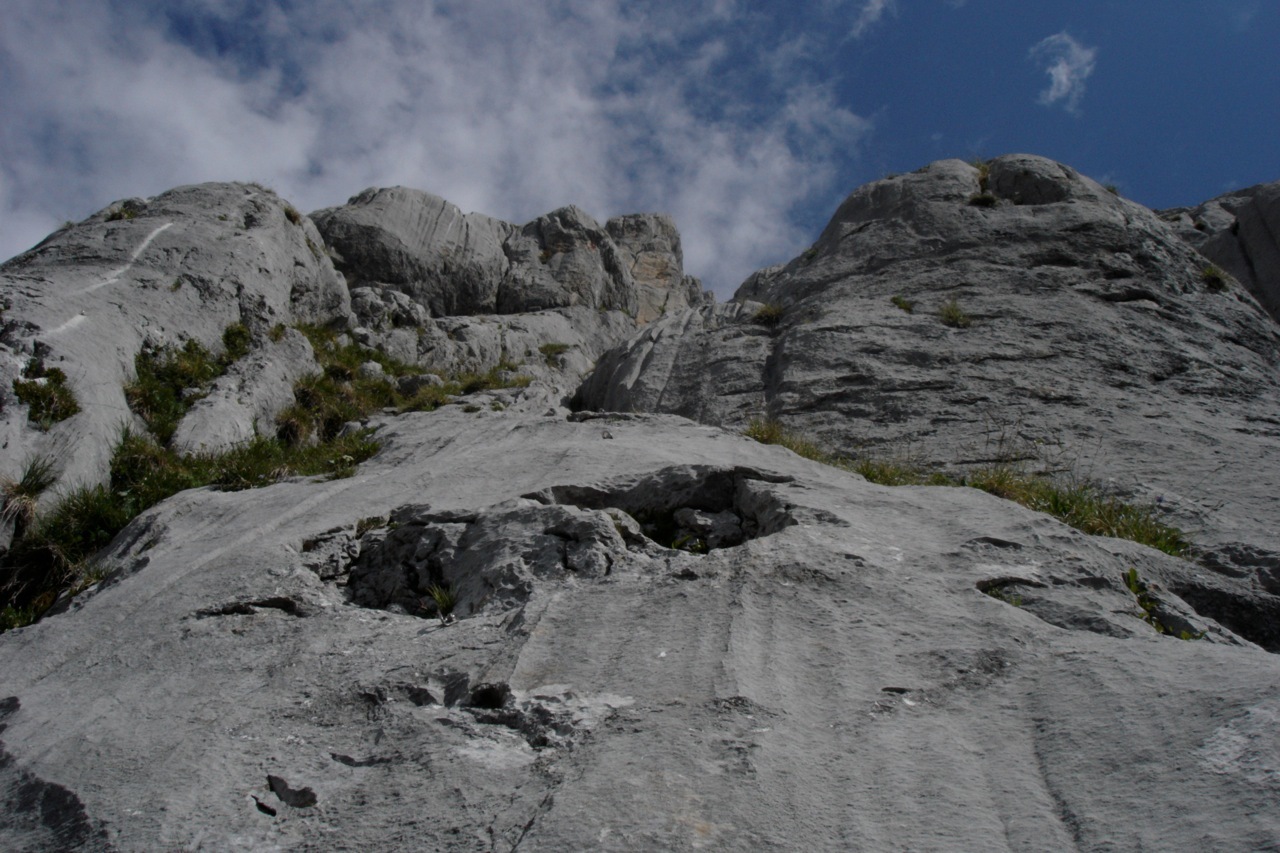 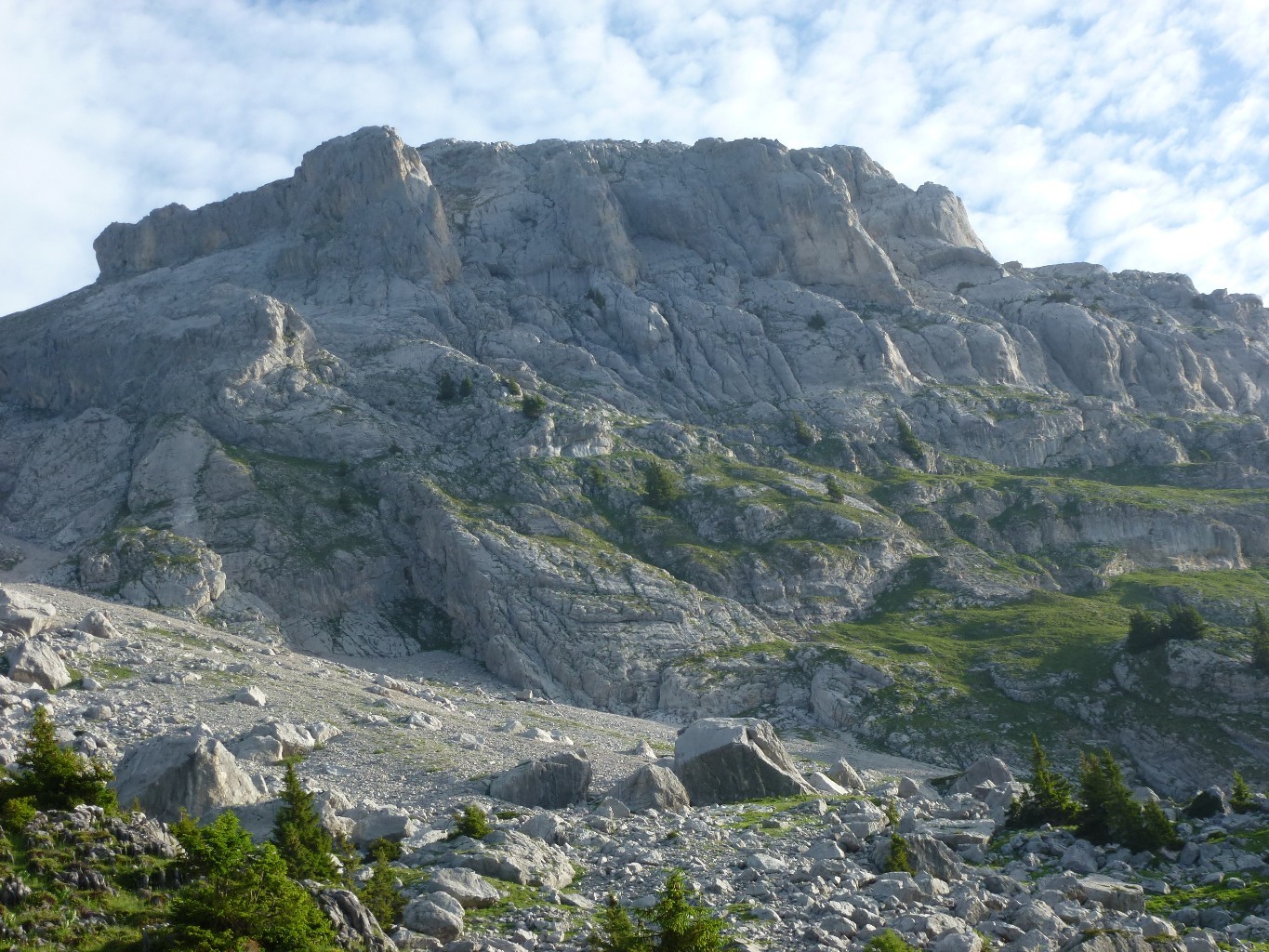 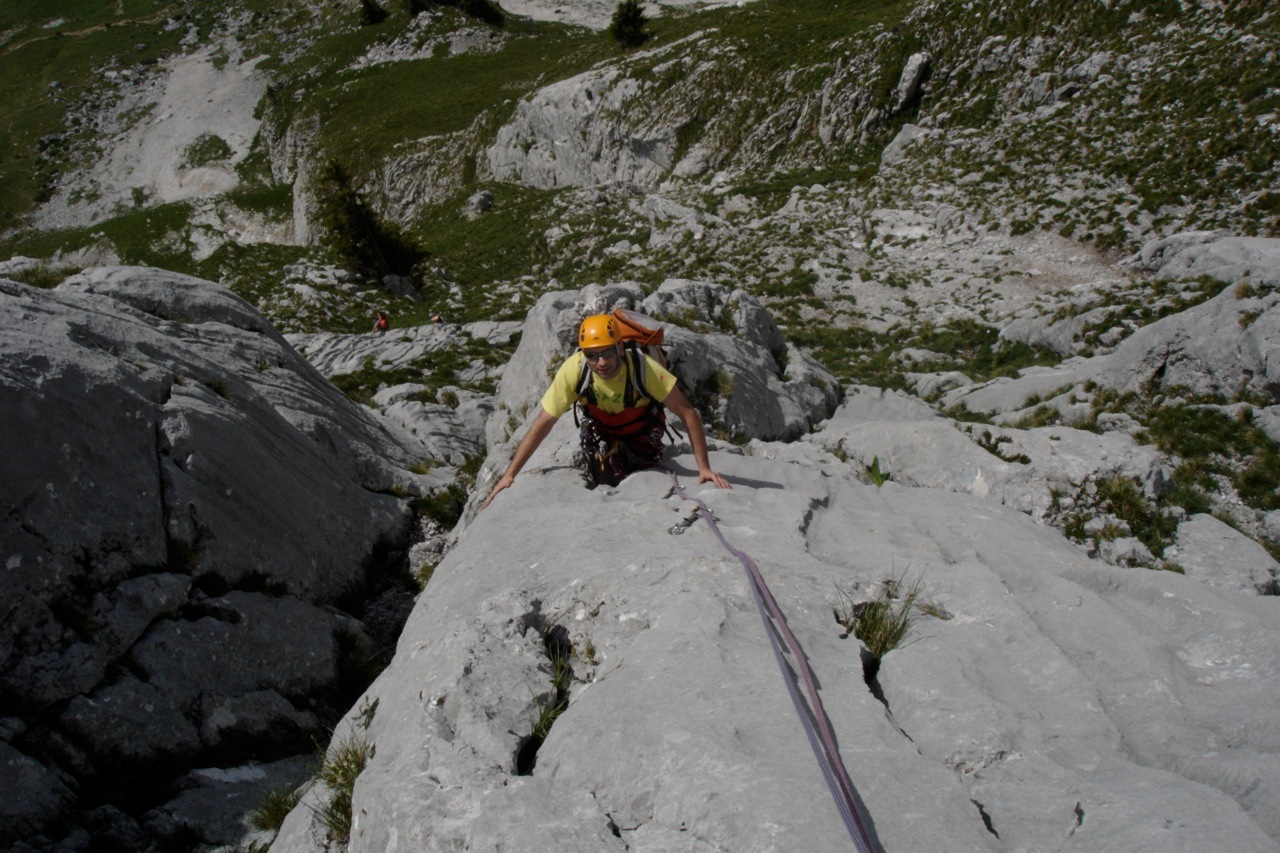 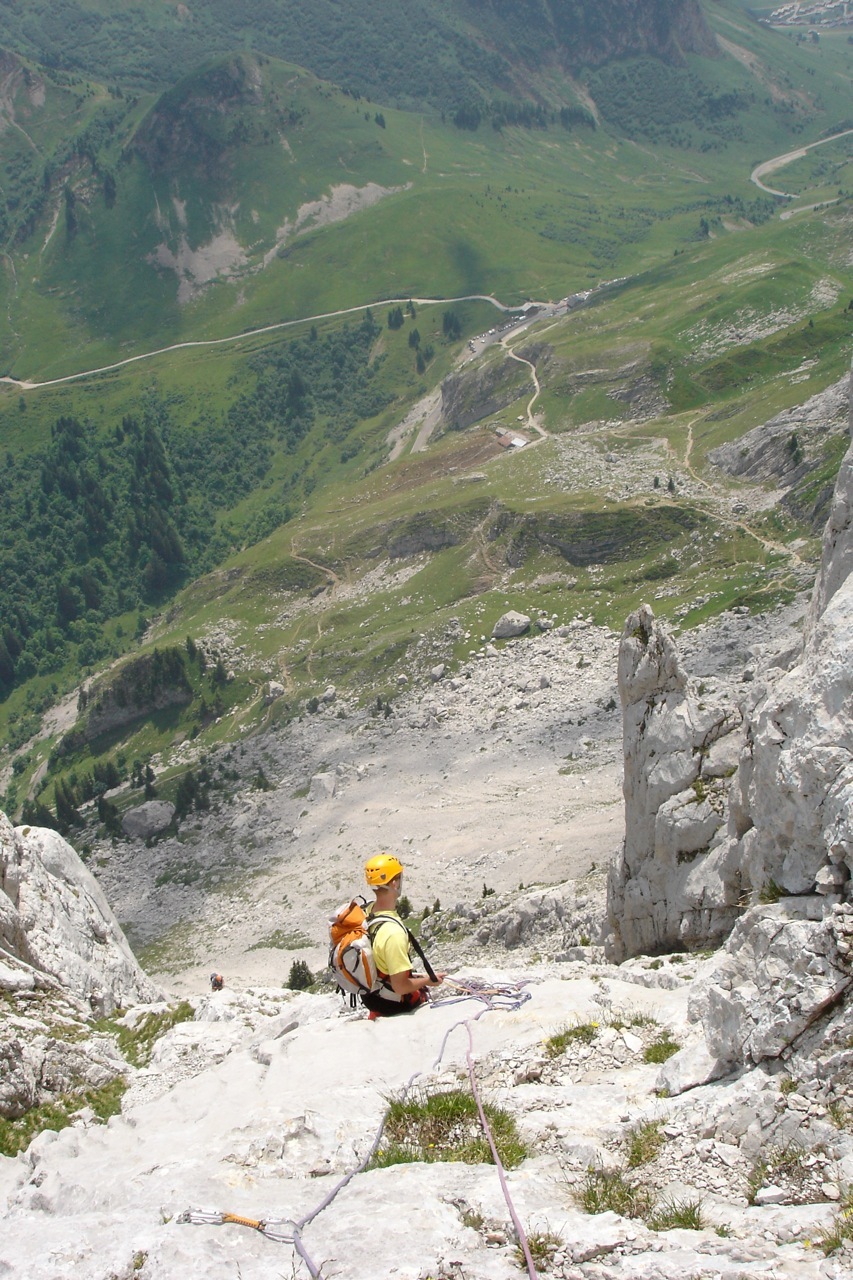 From the Col du Colombiere, follow the Lac du Peyre path to the Colombiere chalet, then take a path to the NE, which first descends, towards the Montarquis caves. The three pillars of the “Pointe Est du Midi” or “Dzerat” are clearly visible. 600 metres after the chalet (alt 1700m) and at the level of a large block, take a path to the left (signpost “site de escalade”), which initially goes parallel to the other path before climbing into a little valley, (cairns). At the top of this little valley is a little col marked by a land slippage. From here follow a faint path to the foot of a rock barrier, pass two cables and go straight up to the starts of “L’annee de 13 lunes” and “Tchao Godilot,” (names painted in red on the rock.)

Go to the left a few metres and climb the ramp above to reach the foot of the climb. Belay on a bolt and a rope sling.

L1 : 3c Short wall then a slab with runnels (cannelures), exiting on the left to reach the belay. (This can also be reached more easily by bypassing the slab to the left.) L2 : 5b On the pillar to the right of a little gully. The other side is the Berhault route. L3 : 4c Continue more easily up the pillar. L4 : 5c Cross the gully to climb the steep wall on the other side on good holds (5c). Join the Berhault route which you follow (4c) to the belay. L5 : 4a Slab with runnels which lead leftwards to a belay below a wall. L6 : 5a Short wall with good holds then easy runnels before traverse on friction to the left. L7 : 4b Slab with runnels to the right L8 : 4a Slab with runnels to the left. L9 : 5c+ A more difficult slab with small hold and friction climbing, excellent pitch. L10: 5b Easy angled start then a vertical wall where it is important to choose the best line.

Possible to walk up to the summit of the Pointe de Dzerat for a nice view (5min).

From the end of the climb, ascend a bit and traverse horizontally northwards, faint path, paint traces and cairns.) At the end of this traverse and as one starts to descend, (i.e. above the “gants rouges du cardinal”), there are two cairns in front and a paint trace on a rock on the right hand side in the direction of a gully/steep ramp.

1. If there is still snow in the gully, you need to descend the slab At the beginning of the slab descent there is a bolt with a ring to self belay or make a short abseil. The bolt is about 25m from the first abseil point and to the left when facing the Pointe Percée and the Mont blanc. The belays to use for the descent are the glued-in bolts. Not far away are the screwed-in bolts of the last belay of “gants rouges du cardinal”. First abseil is about 40m, then descend the rocks to find the next abseil point which leads to a large, grassy and stony gully.

From there descend towards the rock (centre right of the gully) for several tens of metres ( pine tree straight ahead to guide you, plus a faint path and cairns). Find a red mark and climb rightwards over the rocks, (paint marks and mud from other people) to find a first cable, then a second a little after which leads to the last abseil point. A 50m abseil arrives at the foot of the cliff.

On the last part of the descent, you cross the first belay and first pitch of “gants rouges du cardinal”.

From the end of the abseil follow the faint path southwards and descend to join the approach path.

2. If there is no snow in the gully, it is quicker to descend this gully directly to the pine tree and the exit rightwards marked by bred paint, see above Start down the gully (steep and exposed but easy), faint path, cairns and paint marks. After 5 or 10 mins the gully “ends” (rock barrier and very steep slopes); it is necessary to keep to the right bank. Locate the pine tree straight ahead to guide you to turn to the right (a red mark) and join the previous descent.

3. There are other possibilities to descend but the above option is most practical. (Having suitable footwear for the descent is recommended.)

The descent is easy, quick, but exposed in places.

The SSE orientation of the cliff means one can climb in the warmth even at this altitude.

The route is ideal for learning to lead a big route, by doing alternate leads until pitch 8. (Experienced climber 5+, novice climber 4+).