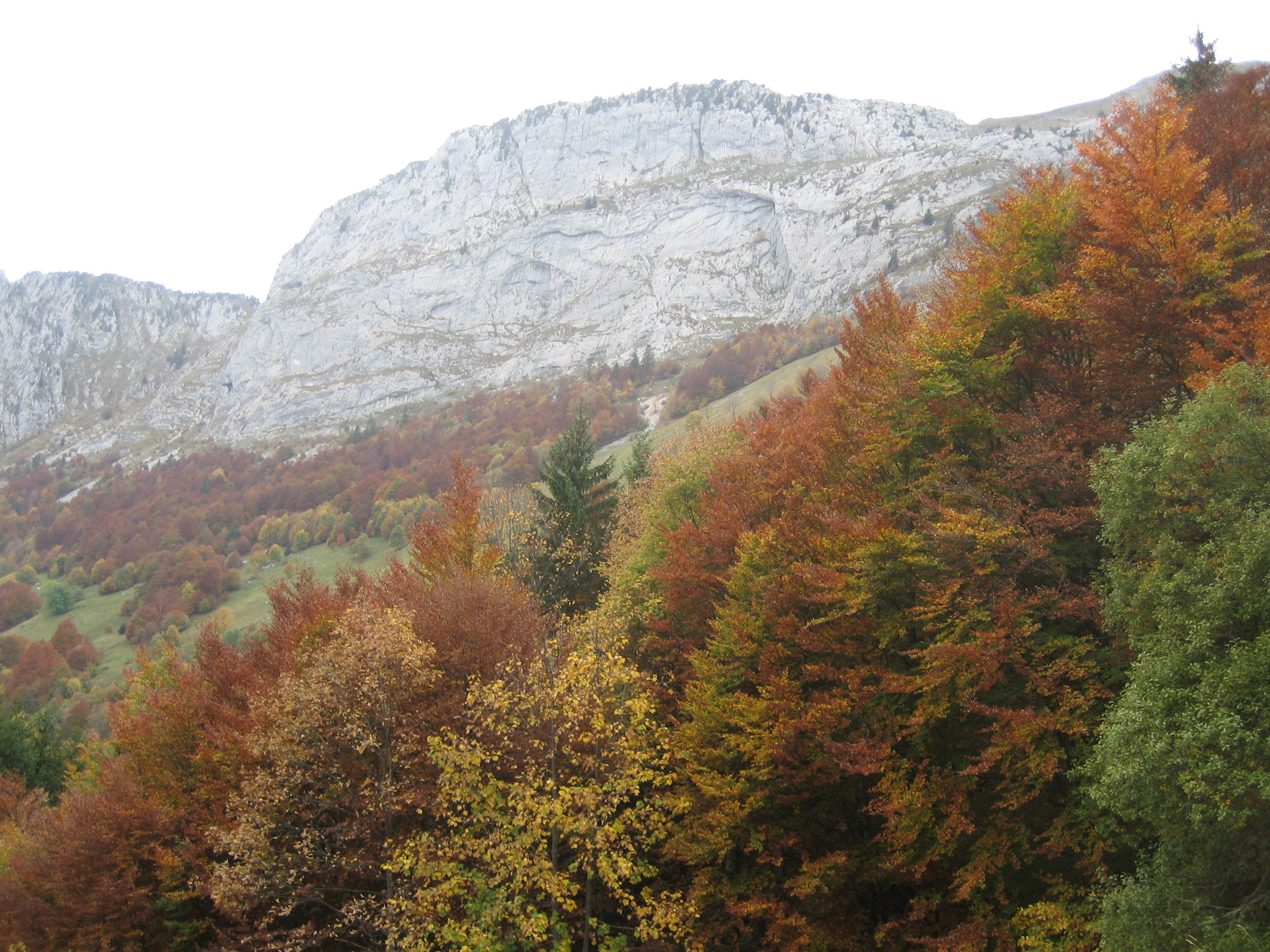 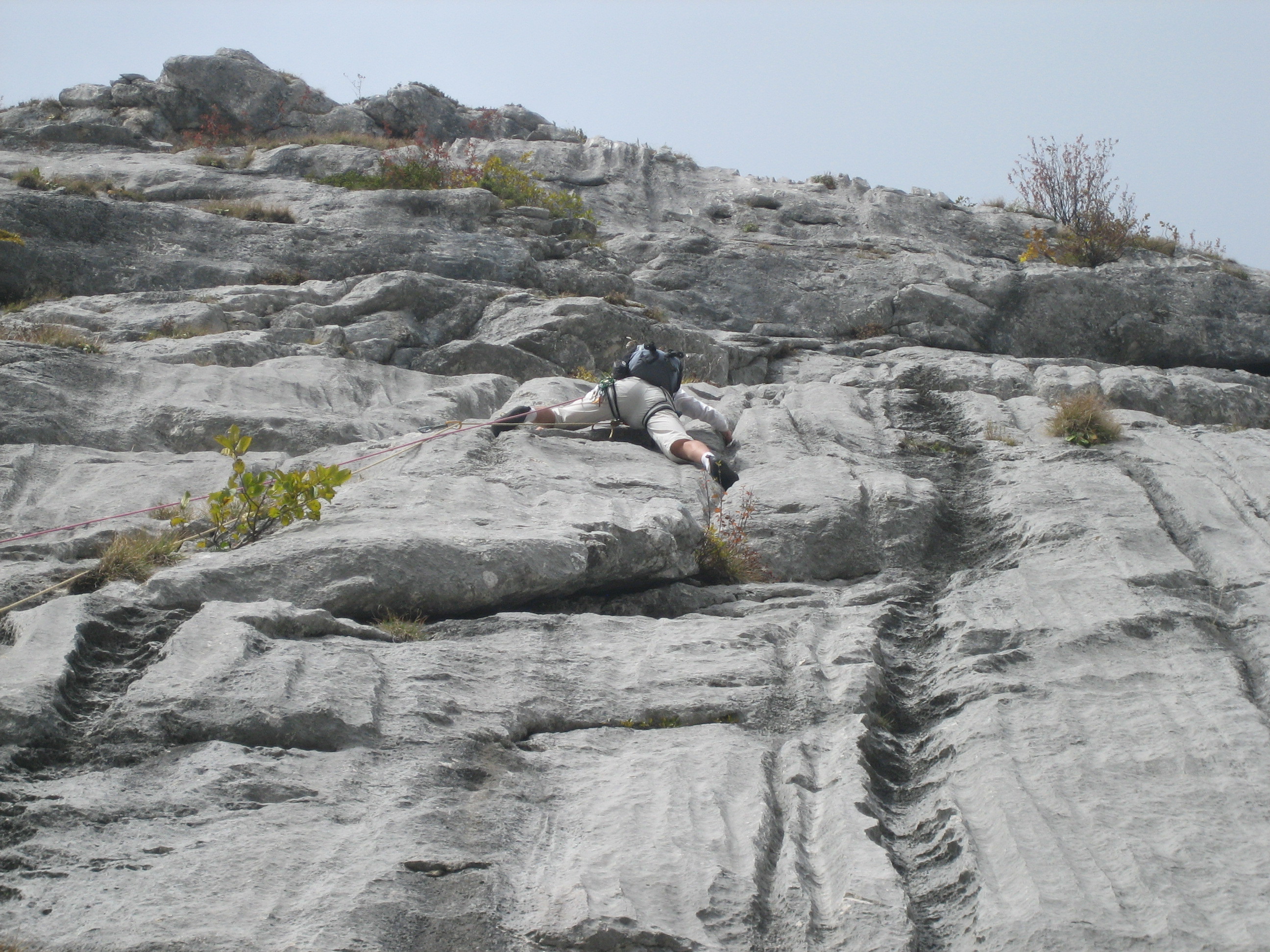 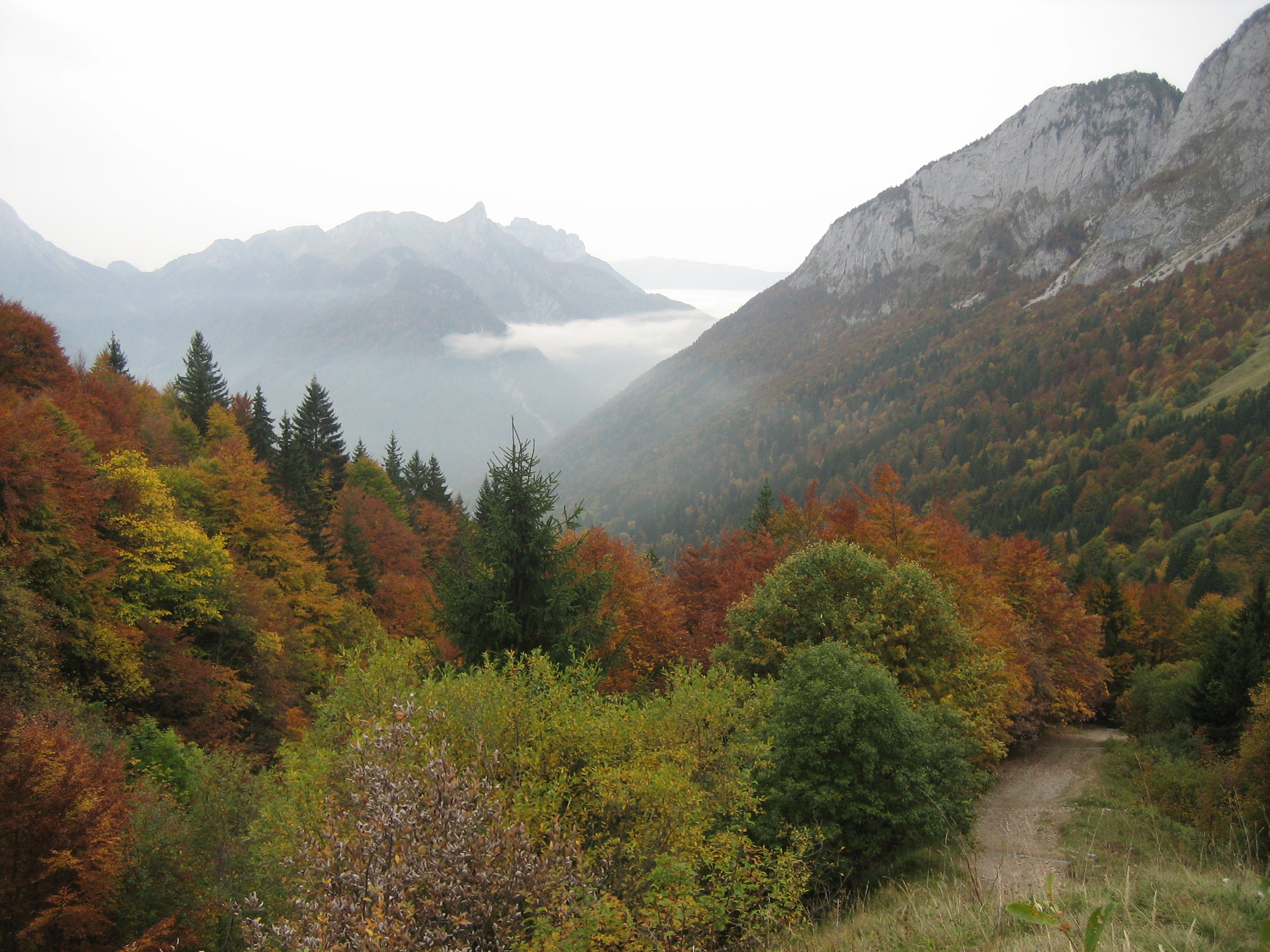 Pleasant climb on good rock of easy angled slabs with several short vertical walls. Well bolted, a times spaced, and with several thread runners. The route is not too challenging at 5c max up to a large ledge. Pitches 7 and 8 above this ledge are harder but in a pleasant situation.

Follow the forest track in the direction of the Col de la Buffaz. After a bench and a barrier take a steep path on the left which, after a lot of hairpins, leads obliquely to the right, skirting the cliff. On leaving the forest, one sees the cliff to the left and a large arch. The route is underneath this arch at the left extremity. It starts from a ledge between two big holes and climbs a large runnel (“cannelure”). The start is 10m to the left the route “Woody Woodpecker, “ the name of which is painted on the rock. Take care, there is a variant that starts between the two routes.

L# | 5b |30m | Climb up easily for a few metres (threads possible), slabs and then a runnel with plenty of holds. First belay on a ledge. L# | 5b |35m | Slab. Belay 3m above a ledge L# | 5c |40m | Start up a short steep wall, (technical), then up to the right to a little pillar. Belay on top of this pillar L# | 5c |35m | Steep slab with holes then runnels. The most sustained pitch of the route L# | 5b+ | 40m| A short slab then a short steep corner with good holds, over a bulge, exiting onto an easy angled slab. L# | 5b |50m | A short pitch; traverse a slab and then a little vertical wall. A large grassy ledge cut in two by a little wall with a bolt. Belay a little to the left at the foot of the face above the ledge, or on a large block at the start of pitch 7.

After pitch 6 it is possible to escape along the ledge to the right then descend on foot or, alternatively, finish up the last two pitches of Sapeyrlipopette at 4c. If not go to the alternative belay 10m further on, to the right of a large fault (bolts clearly visible on the route)

L# | 6a+ | | Three moves of artificial then steep and sustained climbing. Pass to the other side of the chimney and up the smooth scoop. Foresee 3 or 4 slings and an extension sling. L# | 6a | |

Possible to abseil from belay No. 5

From the last belay (no.8), traverse NE across scrub to gain the grassy combe, keeping to the left bank. When you arrive at the large grassy ledge, descend to the right (cairn) the steep grassy slopes in the direction of a gully and a group of 3-4 pine trees at the bottom. (Faint path on the right bank of the gully). At the level of the pines, skirt along the cliffs to the right and rejoin the approach path.

From the last belay (no.8), traverse NE across scrub to gain a crest and follow this to the summit of Pointe de la Québlette (20mins). Descend N to gain the path from the Col de l’Ovine and follow it until the Col de la Buffaz where one joins the track descending to La Crêt.