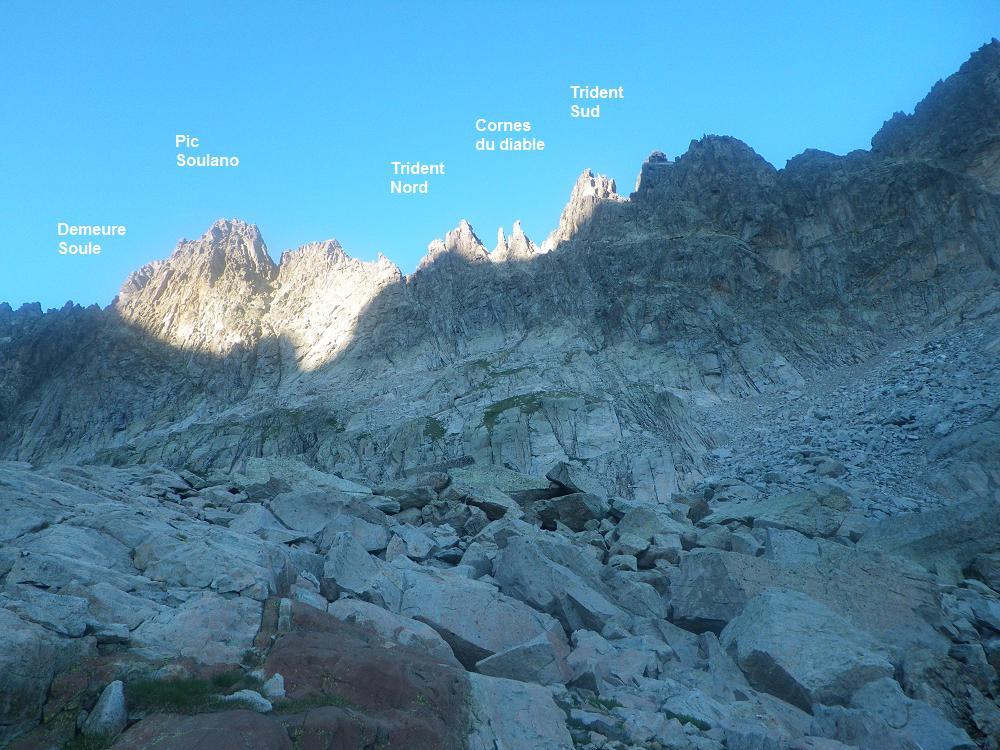 Ascent: This splendid ridge route was carried out in the north-south direction by P. Abadie and J. Arlaud on 17 July 1927.

From Porte du Parc, go up the dale leading to the Peyre Saint-Martin. At Toue de Castérie (good bivouac), go up Las Clottes dale towards the west. In the upper part, go obliquely right towards the Las Néous and climb west to the Soulé Residence. It takes 4h.

From Soulé Residence, follow any crest until the Pic Soulano (II). Descend to the south-east and take a narrow ledge to the east before going up on the crest via an east exposed dihedral (UK-4a /US-5.5). Carry out a small rappel or descend a crack to the east and follow a ledge which returns towards the West in a vertical wall (UK-4a /US-5.5). Continue on the eastern slope until Trident Nord characterised by a Z crack. Climb it (UK-4a /US-5.5) until the ridge. Traverse towards the east two notches to climb the second tooth of the Trident via a short crack (UK-4a /US-5.5). Descend to the south-west then continue on the eastern slope as far as the summit of the third tooth.

A rappel of 25 metres leads to the foot of Cornes. Climb the first ascent via its north-east ridge. A rappel of 20 metres leads to the notch between the Cornes. Pass the western slope and reach the second Corne via a dihedral on the north-west face (UK-4a /US-5.5). A rappel of 20 metres leads to the notch of Trident Sud. Descend slightly towards the west and begin the climb to the left of a chimney. Reach the edge of the ridge and climb two short walls preceding the summit. The traverse of the Trident Sud is without difficulty. Its descent is carried out in a chimney to the south-west (UK-3b /US-5.4). Reach the Plateau des Diables and then descend to the west.

Less unrelenting, the climb goes primarily on the western slope until Pointe Lucifer. You reach the Lucifer notch and via easy ledges on the eastern face you arrive at Pointe Proserpine and descend by reversing via the south-south-west face (or rappelling). The Canine climb, last point of the Crête du Diable, is carried out via a short wall above where you veer left to reach a dihedral (UK-4a /US-5.5). Carry out a last rappel and follow the edge of the ridge without difficulty. The climb takes 4h to 6h.

Descent: Go back to the Peyre Saint-Martin walkway by traversing Las Clottes cirque. Before descending in the dale, traverse towards the Las Néous notch that you leave on the left to reach Toue de Castérie via less steep slopes. From there you go to Porte du Parc. It takes 3h.

Very homogeneous crest in the III/IV, it does not offer an easy escape route.

Access: From Lourdes, go to Argeles then Arrens and the Portes du Parc.

Accommodation: This route does not pass the summit of the Balaïtous. On the other hand, the traverse of the three ridges of the Balaïtous, North Western, Costérillou ridge and Crête du Diable are a fabulous overlapping of the massif. Start from Larribet refuge (05.62.97.25 39) and bivouac at the Soulé residence or it will be a very long day.