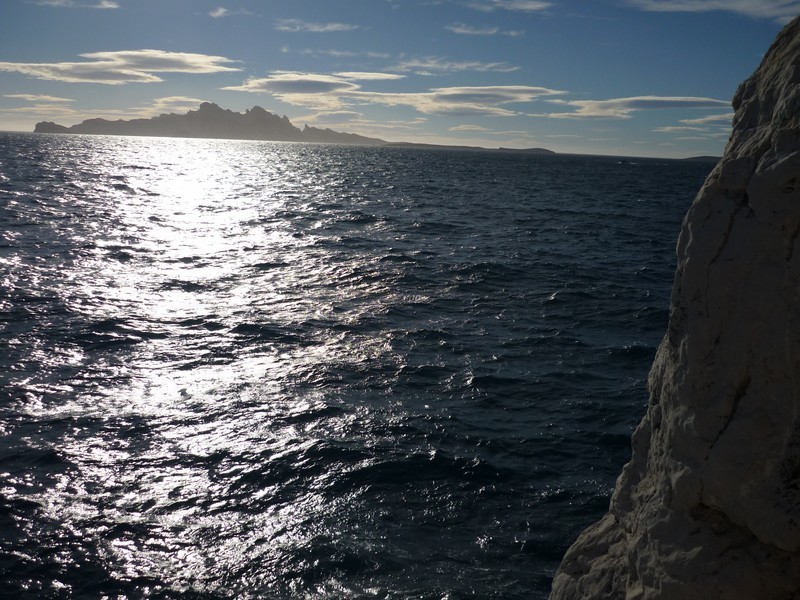 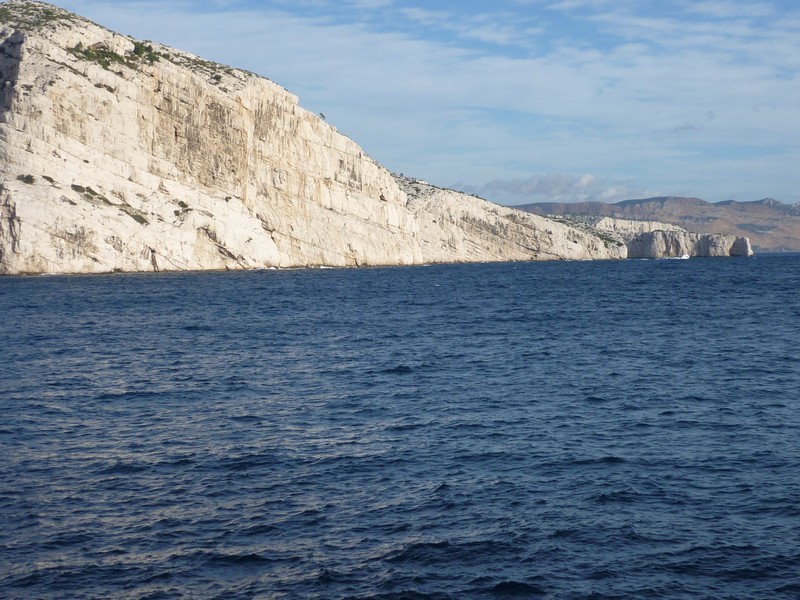 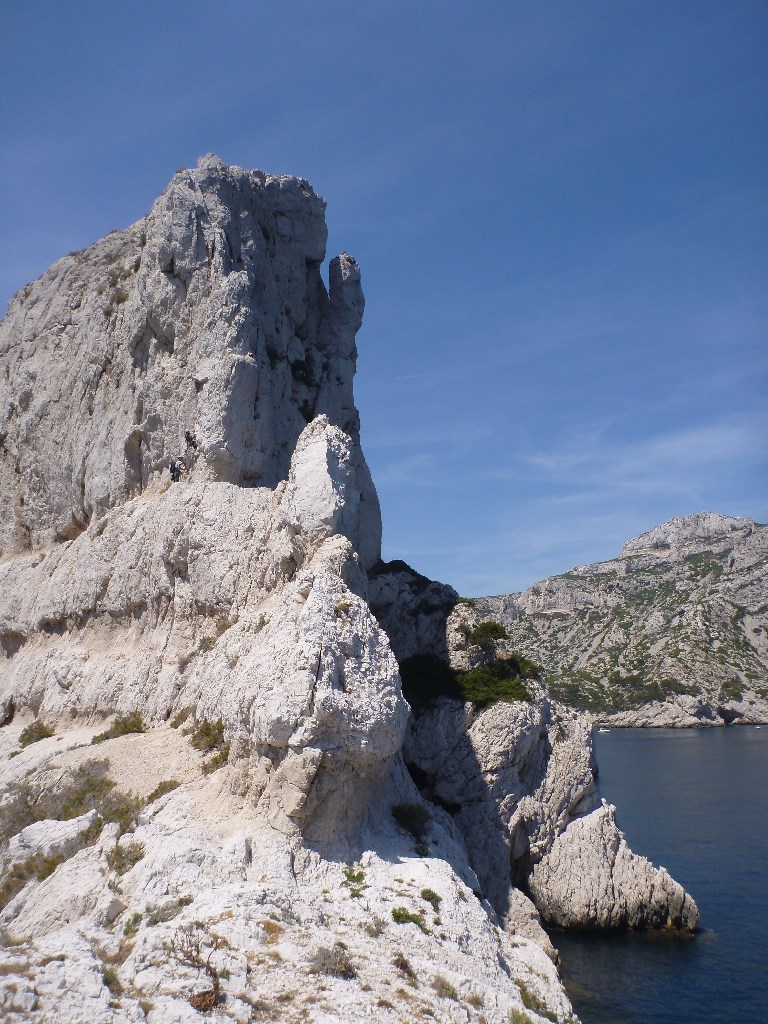 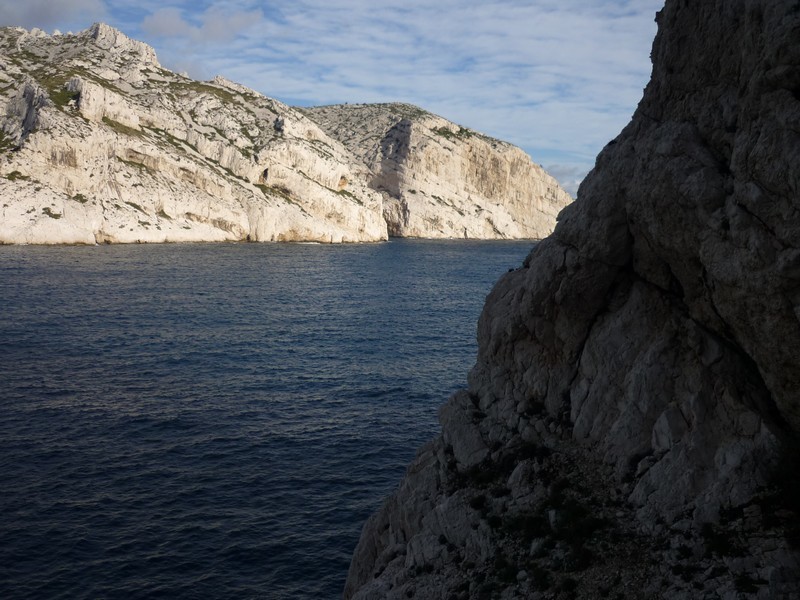 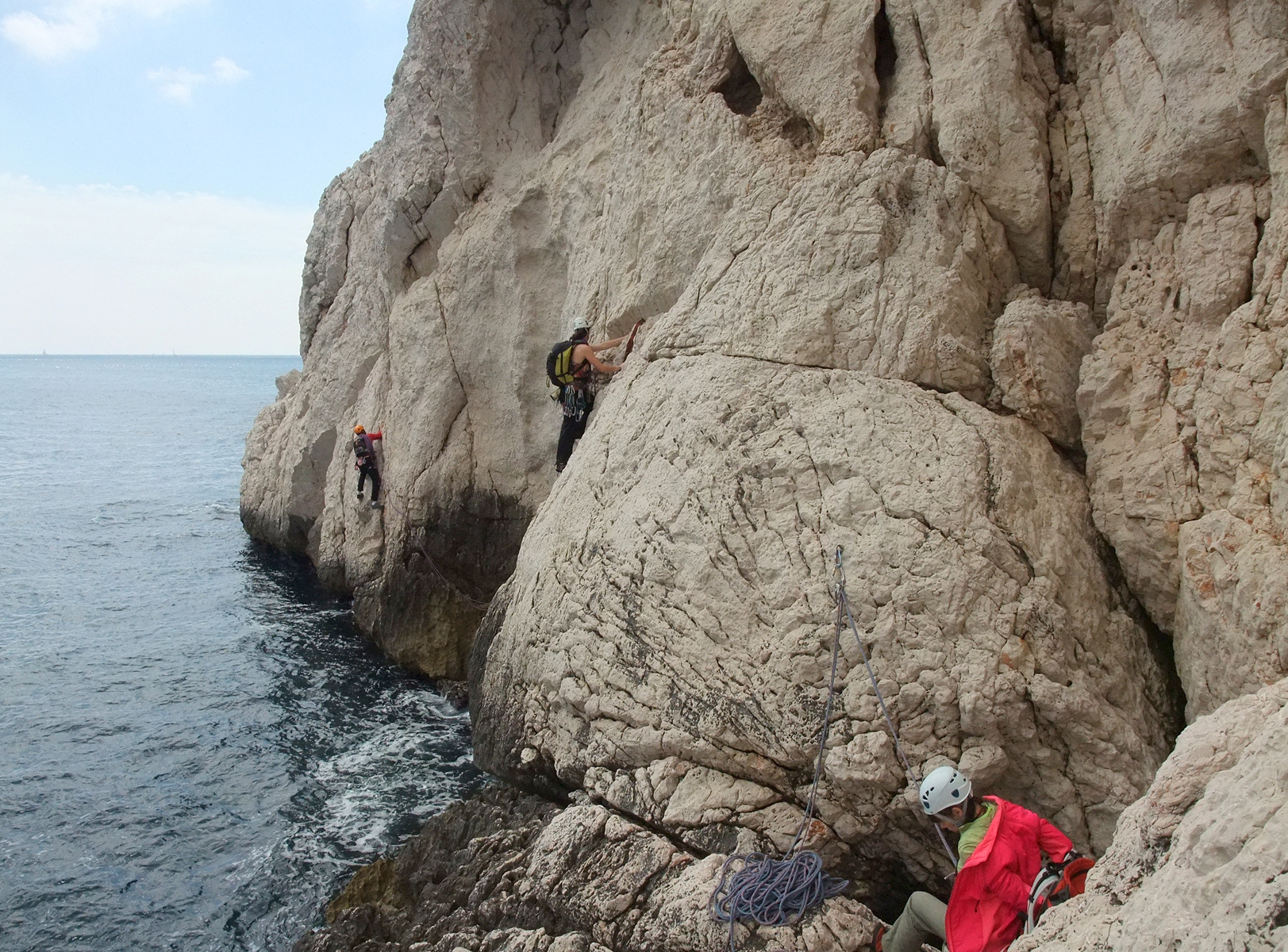 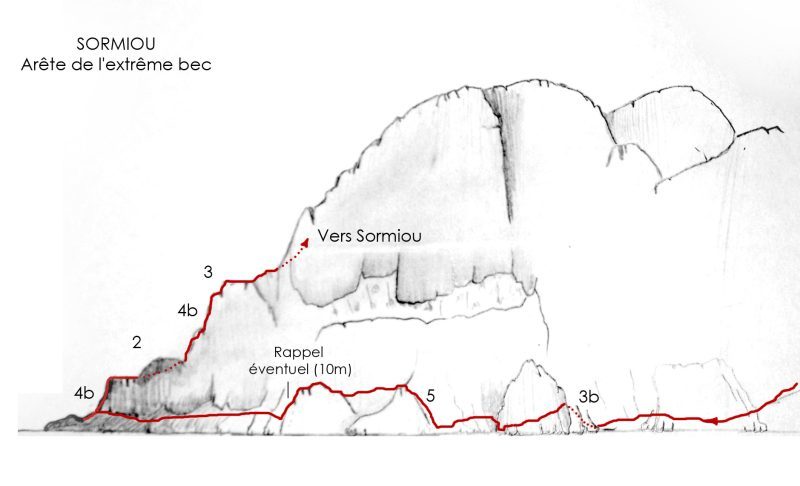 Make a visit to the Extrem Bec du Sormiou, starting with a traverse along the NorthEast side of the cape, then ascending the arete. Equipped for protection, varied climbing situations on mostly sound rock, close above the deep blue water - (Key flaw is that the nice rock-climbing sections of the Arete are short, followed by longer walking/scrambling on loose + grassy stuff to reach the top). Best climb-traversing section is for well-experienced climbers only, but there is an interesting-enough alternative. Dangerous with wind and waves, especially wind from the East. Might require getting shoes wet if tide is very high.

Driving to parking at the trailhead is often closed to vehicles without special permits on weekends + holidays, and closed every day during summer and shoulder seasons. See details linked from Parking symbol above on this page. In which case need to park NW from Col de Sormiou and walk in on road and/or trail - (then consider “Arêtes Integrale” variation below for returning).

Hiking from Sormiou village (after walking SE on the road), turn R just before the beach (GPS latitude longitude approx N43.2100 E5.4198) and follow the trail with solid-Black-line markings SSW up the hill about 50 meters. Turn left and traverse roughly horizontal SE about 300 meters (along the way is a short section going straight up a narrow gravel gully, exiting L onto rising trail) to meet a second narrow gully of gravel (GPS lat long approx N43.2070 E5.4224). The trail splits, with the R-hand trail (Black-triple-dots) going S up steep gravel toward the Col – but instead take the L-hand trail (solid-Black-line marking) toward the Bec, at first up a little then generally horizontal about 270 meters SE, at first up a little then generally horizontal, then downward toward Cap Redon (a smaller side-peninsula out left to the East).

There are three high rock platforms out east from the main peninsula toward Cap Redon, but you cannot see the lowest farthest on the approach. The one which leads into this Traversee route is the highest most Westerly platform. So … About where the solid-Black-line marked trail turns left to go down its final section toward Cap Redon and the water, leave the trail and head off Right and go gentle S about 15-20 meters through some bushes to a view platform (N43.2058 E5.4256) with view overlooking Cap Redon. . . (about 20-30 minutes from the Sormiou beach village).

Traverse along NE side of Sormiou peninsula

The obvious steep white slab above has more than one bolted line: 4c (with 4 bolts) on its left, or 3b/3c up the wide crack on its right side. Climb up to a wide ledge above (pitch < 25m, 2-bolt anchor). Follow the ledge Left (becomes narrow), across a corner, down to the reddish flat at the entrance to the Capelan cave (interesting to make a short exploration inside the cave). Scramble up left about 15 meters to the base of steep white rock with two bolted lines.

For the most sustained climbing, next traverse Left below and around corner with single bolt – but this traverse down close by the water is only for well-experienced climbers who can easily handle the difficulty and the sustained exposure (see “protection Bord de la Mer” below under Remarks). If in doubt take the Variation next below instead.

From the outside corner with a single bolt (to the left of the bottom of the two bolted lines), first go down about four meters. Traverse Left a few meters above the water, horizontally about seventy meters, staying mostly above the sea (3b-4b) to a bolt belay (quickdraws and perhaps slings useful for protecting the climbers following). Next downward along ledge to a belay just a couple of meters above the water. Down left from here to the very edge of the sea, and traverse a couple of meters on dark rock. Climb up diagonal-toward-left crack (5a+ max free > 4b obligatory with aid of etrier or several slings) - (protection at least five bolts) - to a belay near the top flat (pitch < 35m). Next a descending traverse on a wide slanting ramp of white rock, then up a little, then scramble down to a deep gap (mini-fjord) connecting up from the sea. Step across the gap at its narrowest point, then climb up on good holds (4a with bolts) to reach the rappel anchor (1-bolt as of 2017).

Next directly down almost to the water (many good holds at difficulty 4b, with bolts) – or make a rappel of 15m. Traverse horizontally for about a hundred meters on a sloping ledge (difficulty 2) a few meters above the sea to reach the Extreme Bec, with a wide area at the east side of the bottom of the arete.

Up the Arete de l’Extreme Bec

Climb up the steep pillar (somewhat polished) to belay at top or perhaps a bit on left side (4c/5a with bolts). Next perhaps on easy ledge then onto (2b/3a perhaps protect with slings) the arete to belay at the foot of another steep wall / pillar. Climb that past a threaded rope/sling placement more toward the right (rather than the obvious crack to the left, more difficult polished), then up to belay on flat top (4c/5a with bolts). Then climb a dihedral to reach grassy slopes, easier toward left (SW) side. Scramble/walk to the summit.

From the summit go NW roughly along the crest, over or around two more higher points to reach the Col Lui d’Ai (lat long ~ N43.2061 E5.42335), with a couple of down-climb sections near the Col (difficulty not more than 3b). Then follow the Black-dots marked trail down to the Black-line marked trail, and take that back to Sormiou village.

protection Bord de la Mer: The long traverse section of the main (non-Variation) route which stays lower down closer to the water (“bord de la mer”), is reasonably well-protected for lead and following climbers who are “solid” at the difficulty grade. But if a climber fell, they would end up below section with the good holds, and so might be unable to climb back up to get back on the route. Anyway a following climber could fall two or three meters or more even if on a good belay from the leader, and so might hit some protrusion or ledge or sharp rock and get seriously hurt – because it is a horizontal traverse section. And this traversing section is very sustained, so if a climber gets very scared in the middle somewhere, there is no simple escape: going back might be just as scary and difficult as going forward.