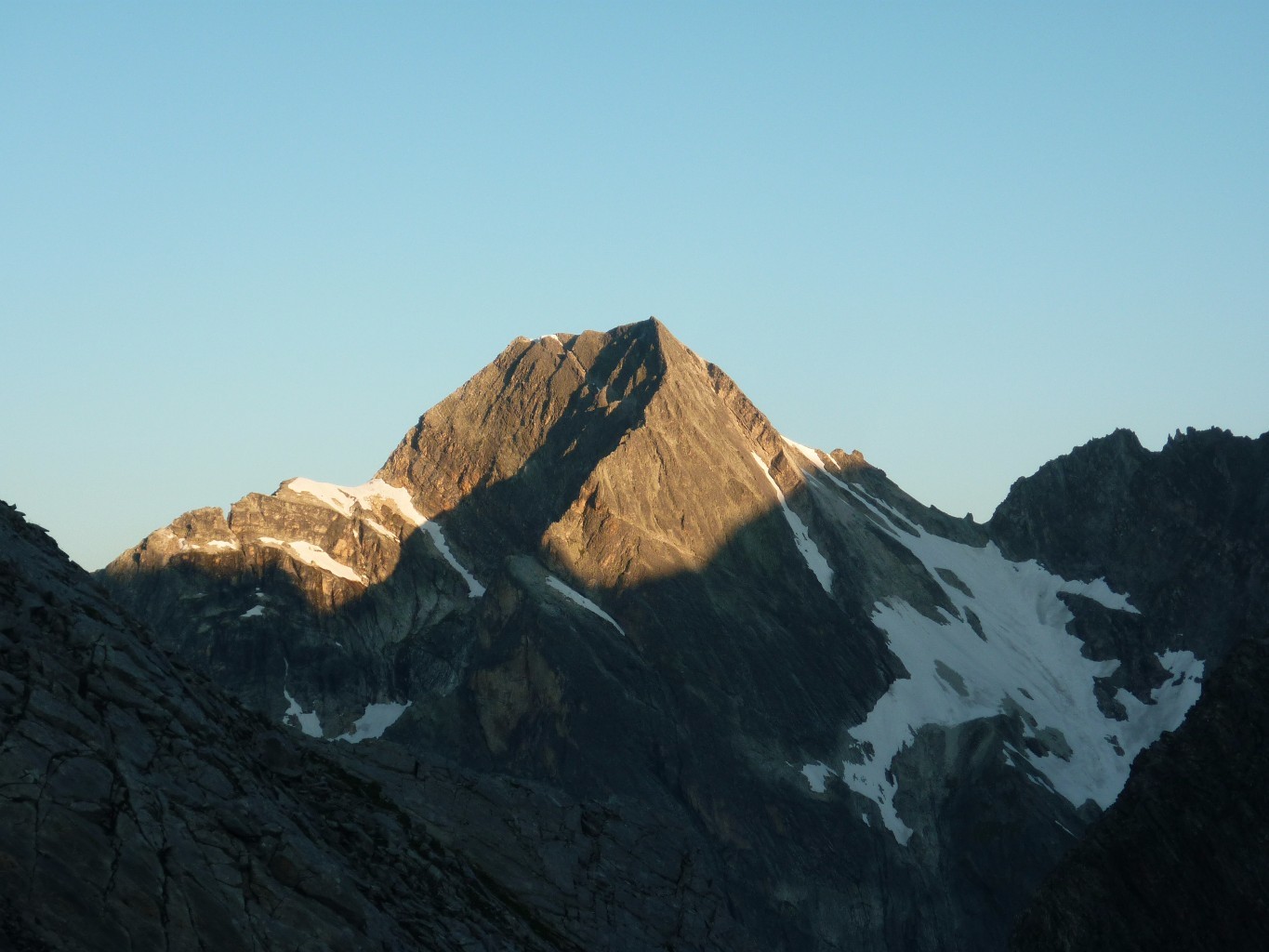 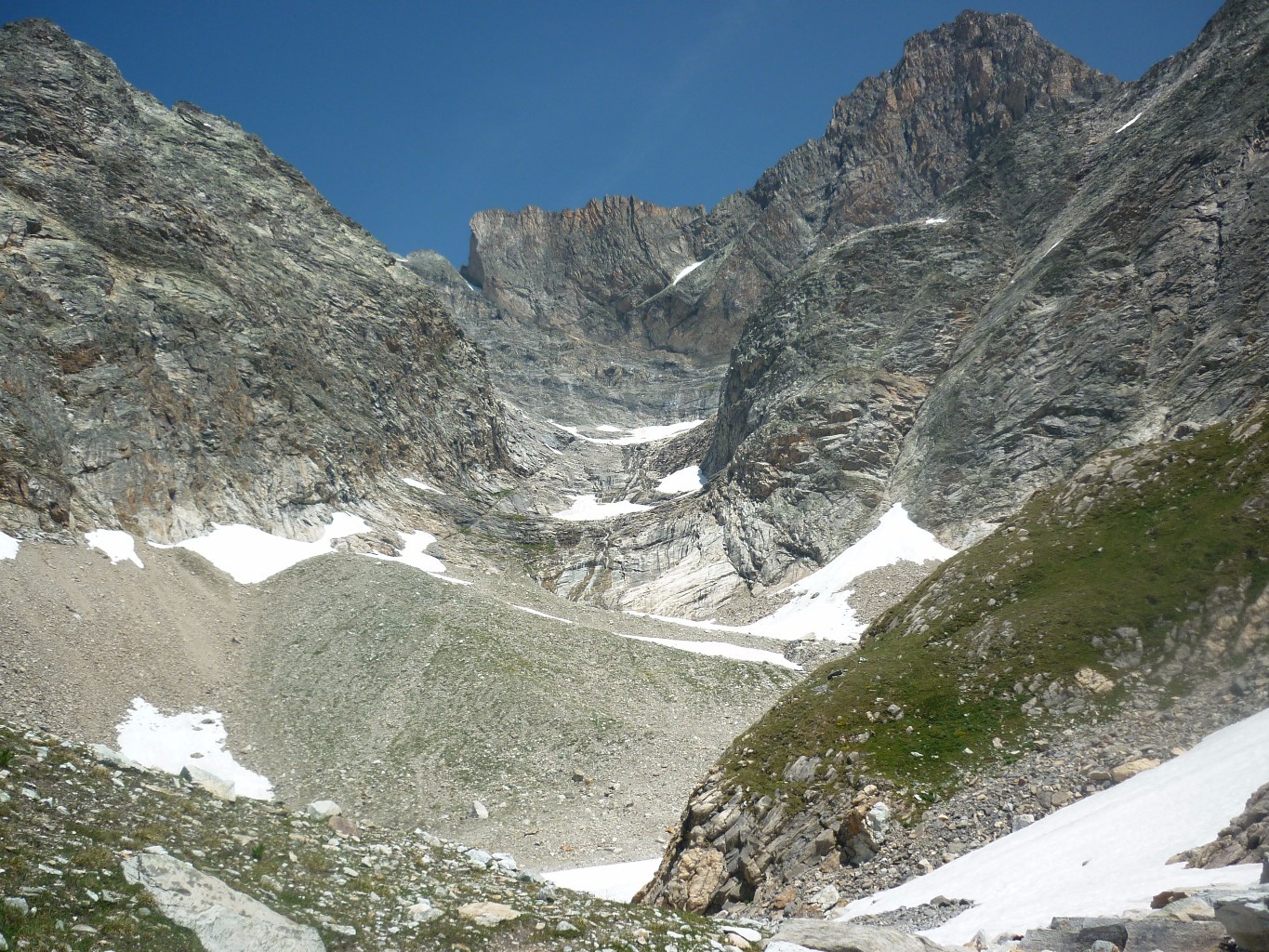 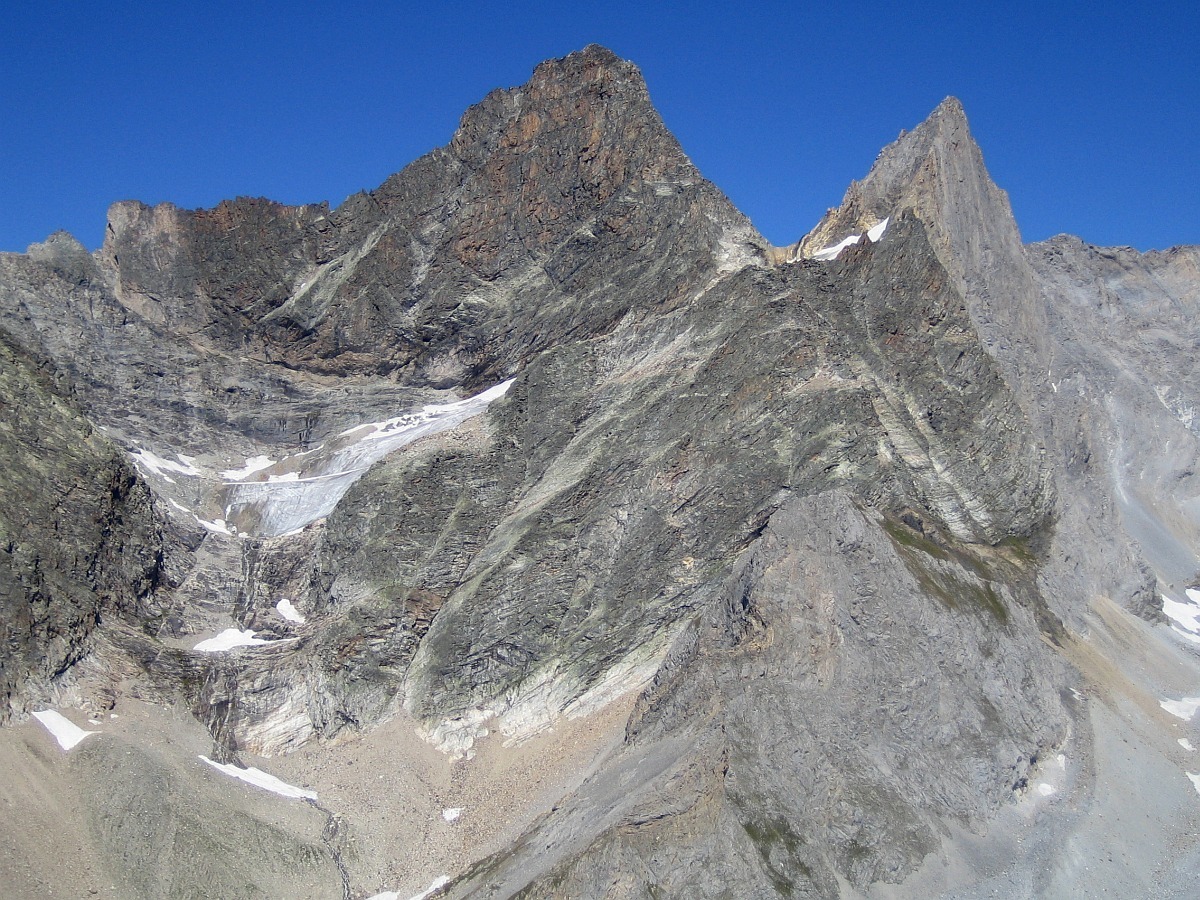 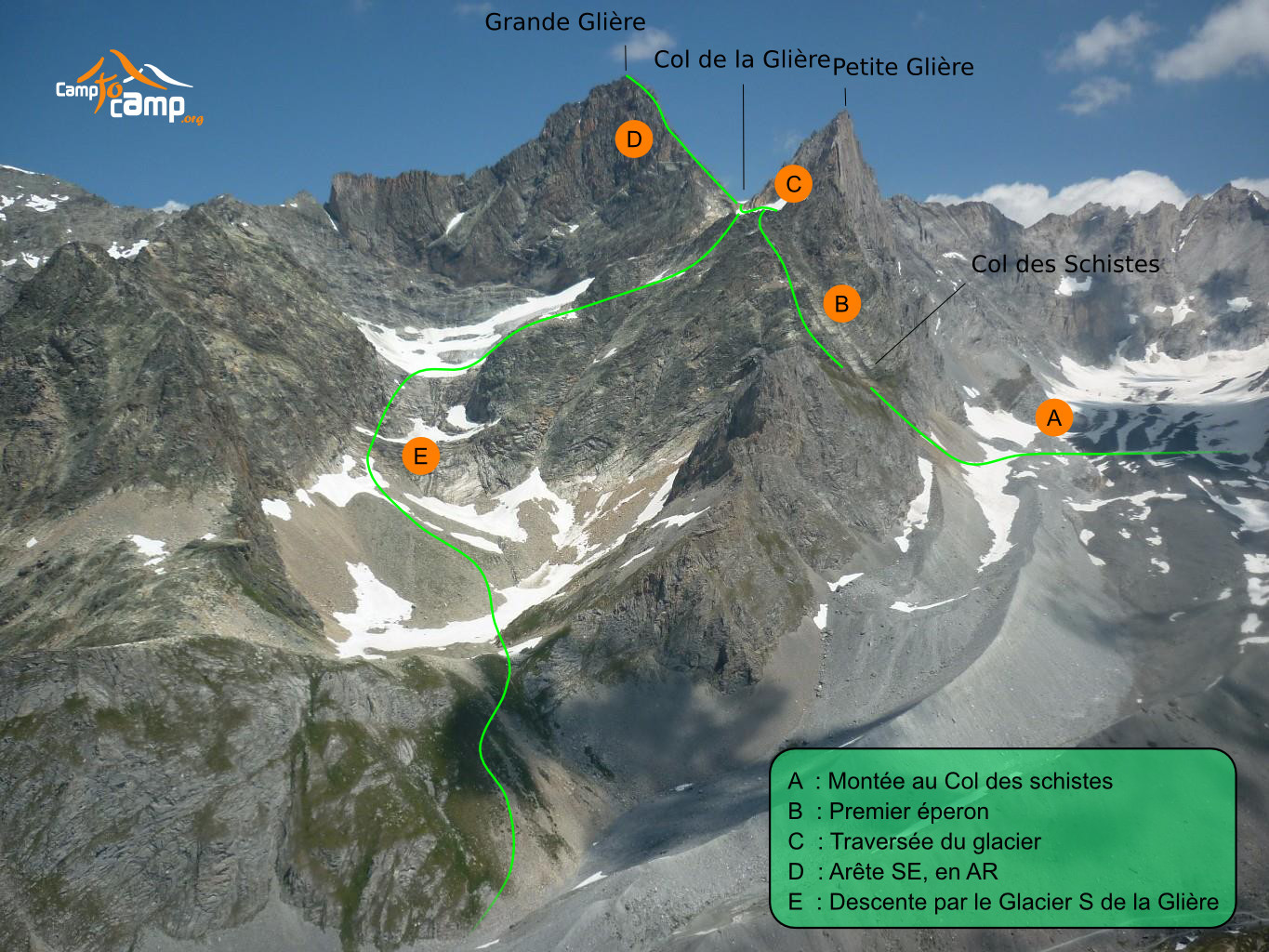 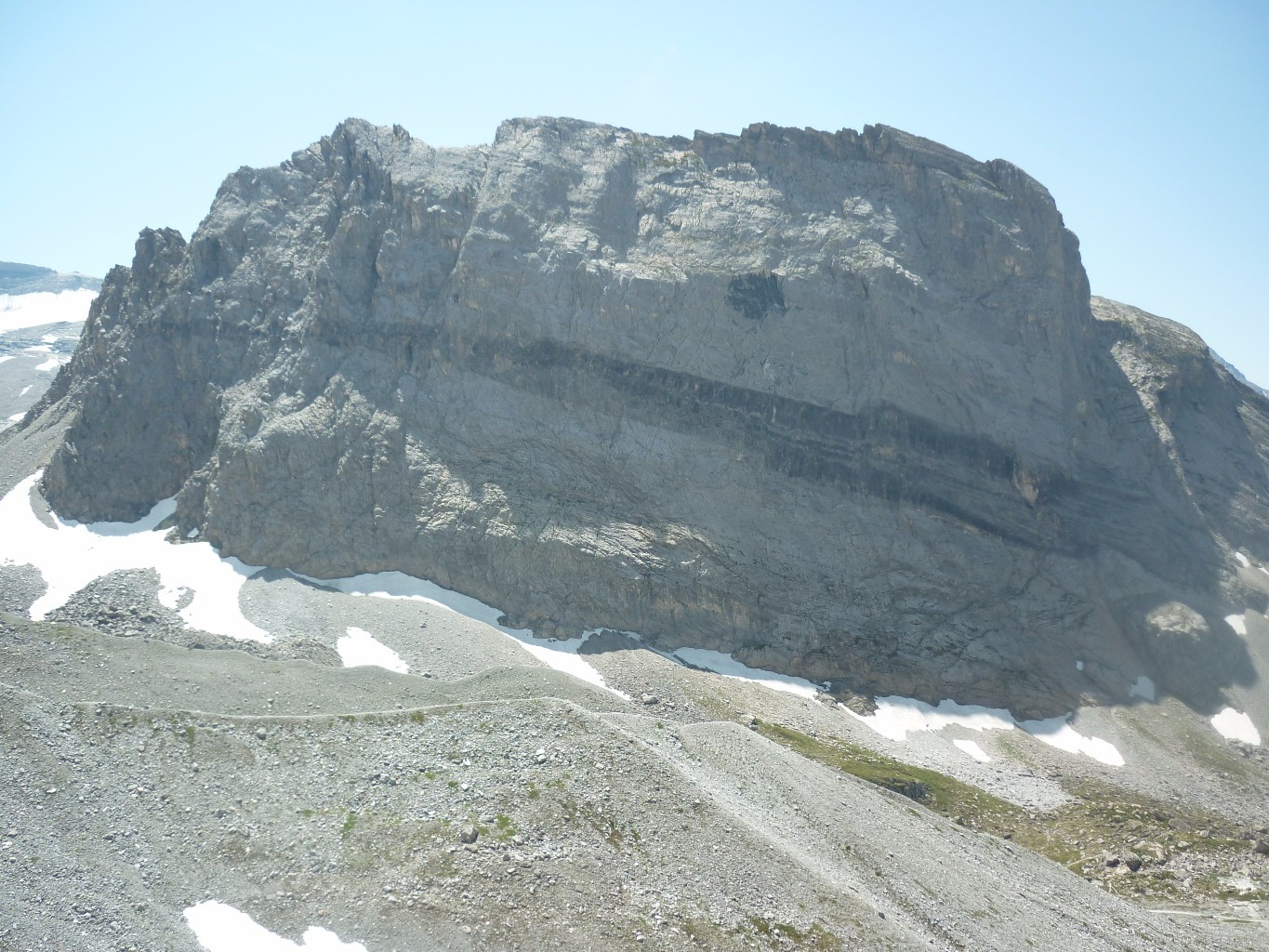 Ascent: The Grande Glière is a very beautiful Quarzite pinnacle. It is also called “Cervin” de la Vanoise. The rock is good and rather exposed high mountain ambience at the summit give this route character.

From the Col de la Vanoise refuge where you will have arrived the day before, you need to get up ay 4:00 a.m. to make the approach at night. Descend by a small path that you need to locate the day before at the edge of Lac Long. Deviate from the normal Grande Casse route to skirt the 400 meters of the lake on towards the North traversing morainic boulders. Then climb the high mountain pastures to reach the summit of Grande Casse moraine by traversing a small trail.

Climb while remaining on the moraine up to approximately 2680 meters, then easily traverse the stone covered glacier to reach the foot of Col des Schistes. Climb the steep moraine as best you can, then to return to the left on earth and rock slopes. You reach a spur, then Col des Schistes (GPS lat long approx N45.40617 E6.79068). It takes 1h30 from the refuge.

At the pass tie on and follow the rock ridge while remaining on edge, then via a ledge traversed on the southern slope until a spit and a chain which makes it possible to easily reach the spur in two pitches.

Follow the spur as best as you can via the cairns marking out the route. You need a certain amount of knowledge of this route. The route zigzags continuously to reach the Glière glacier. Do not hesitate to make a few pitches.

At the glacier, put on the crampons to easily reach the Col de la Glière pass (GPS Lat Long approx N45.41098 E6.79375) by making a circle arc with a short steep slope at the end - (the final slope could be delicate at the end of the season).

From the pass, follow the spur until a small wall with a spit. Climb it (sequence of III+) then continue the spur marked by cairns which makes it easier to find the route. The route zigzags a lot. A large corridor in two pitches, followed by a traverse make it possible to reach the virgin installed by the Pralognan guides. Climb a small wall then continue the ridge as far as the summit. It takes 4 to 5 hours from the Col de la Vanoise refuge.

Descent: The descent of Grande Glière is done via the same route as the climb until the Glière pass. It takes 1 hour to reach the pass. Put on crampons to descend the southern glacier of the Glière while remaining on the left bank. A small slope makes it possible to reach a flat area around 2950 meters that you traverse horizontally to reach the right bank of the glacier. Descend the right bank to reach the right moraine of the glacier where you remove the crampons. You reach a ledge descending from left to right and continue while following the tracks until the foot of the rocky steep pitches. From there, unrope to reach the Lac de la Sechette. Take a steep trail which leads to Lac des Vaches and the cars at the Fontanettes parking lot. It takes 4 hours from the summit.

The Grande Glière is a not very difficult route, but it takes place in high mountains with constant rope manoeuvres. Good knowledge of the route is imperative.

Access: From Moûtiers, go to Pralognan la Vanoise at approximately 30 kilometres. At the entry to the village, at the second roundabout, fork on the left to cross the river and reach Fontanettes parking lot at 1600 meters. From the parking lot, climb GR. 55 to the Col de la Vanoise refuge which takes approximately 2 hours.

Accommodation: The Col du Vanoise refuge can be used to access many mountain routes. It is attended from mid June to mid September as well as from the end of March to mid May. Advance reservations are a must. Tel: 04 79 08 25 23.