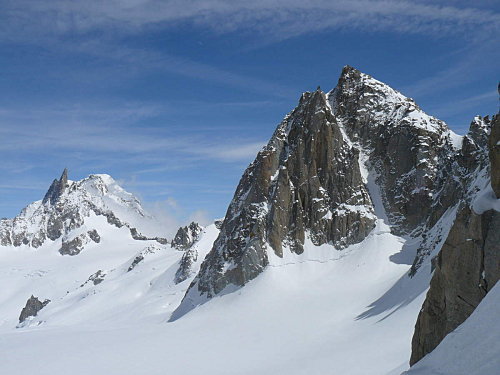 From the Torino hut or the Pointe Helbronner

Cross the Col des Flambeaux, go under the Aiguille de Toule and continue towards the Combe Maudite. Pass under the N Face of the Tour Ronde and reach the bergschrund of the W face.

From the Aiguille du Midi

Descend the classic Vallée Blanche until about 3200m, at the level of the Pointe Adolphe Rey. Go up, depending on the state of the glacier, often with lots of crevasses at this point, either directly under the rock buttresses, or by going to the E towards the col d’Entrèves, and the cols de Toule, (usually well tracked). Reach the upper plateau of the Géant glacier. Go towards the W face of the Tour Ronde. You do not see the couloir until the last moment.

Climb the couloir mainly by the true left bank (50° then 45°) until you reach a snowy saddle where the it joins the N face route. In the upper section, rocks are often uncovered. Exit onto this shoulder and go up it to the final buttress. Two possibilities :

By the standard route : snowy ridge at the start to a little, obvious col, (abseil ring behind a rock boulder.) Then descend the 45º, E facing snow slope.

The same way as you climbed up and the the Vallée Blanche if in condition, if not climb back up to the Aiguille du Midi or the Pointe Helbronner. The central runnel is often iced, meaning you have to ski the sides of the couloir.

A deep gully which only gets the sun in the afternoon. It allows one to make a pleasant traverse of the Tour Ronde. Because of the direction it faces it is often in better condition than the NE face. Average angle 48°, (Guide Vallot). The difficulties are mainly to cross the bergschrund and the last 50m of the route.
Remarks for skiers If you suspect the snow might be hard, do not start very early as you will have to wait at the top for the slope to warm up. 50°/250m. The couloir is given at an average of 48° but it is often impossible to ski down the middle, because of a central ice runnel. In which case you have to ski the sides which are much steeper, (up to 55º near the top).