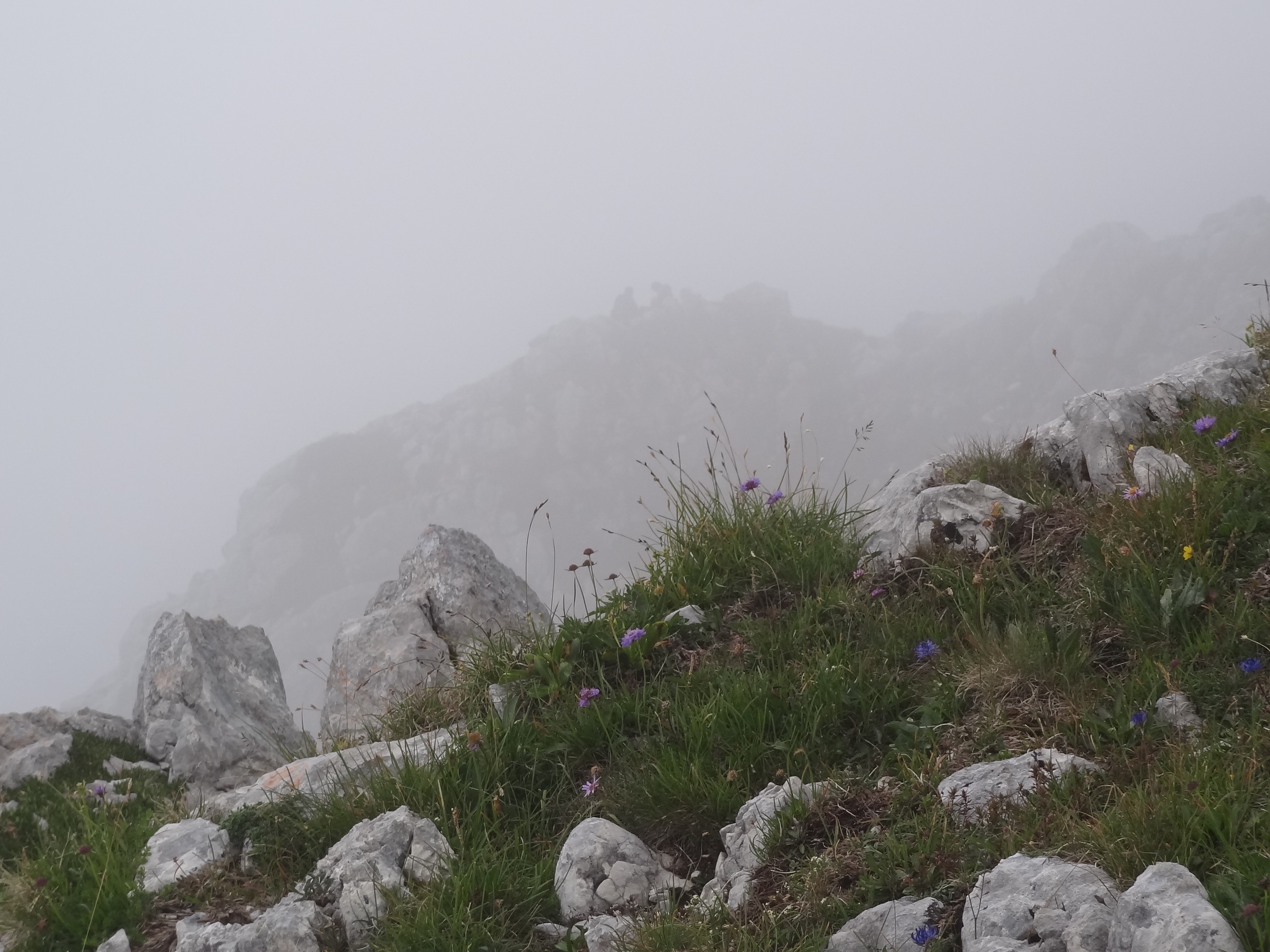 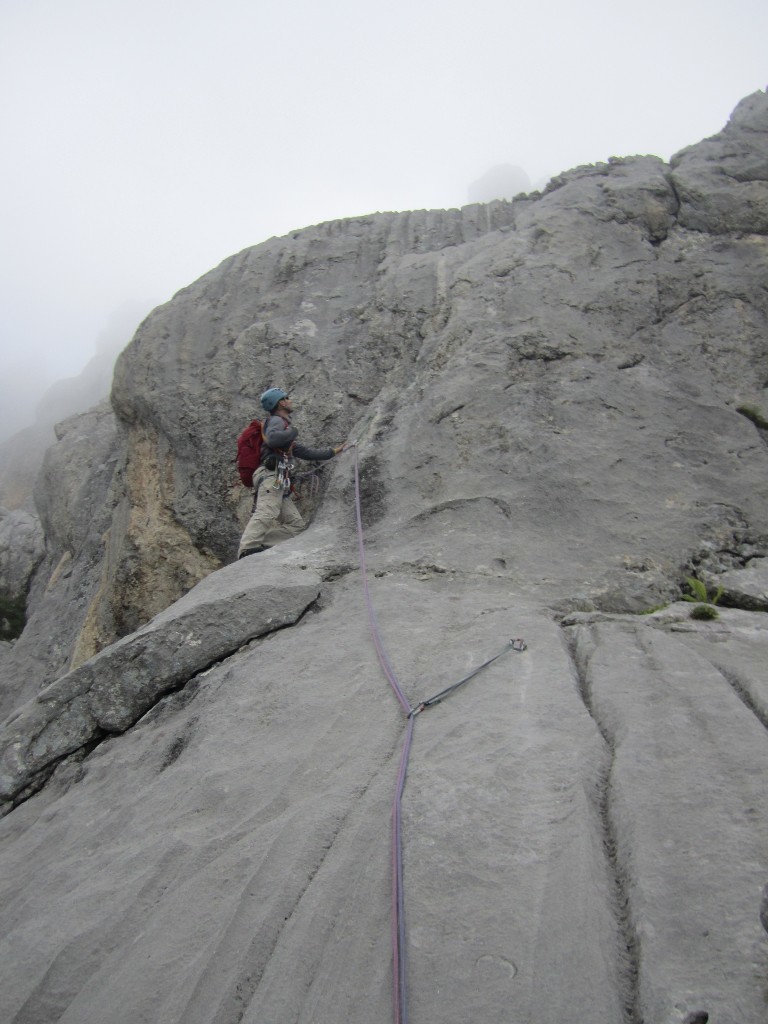 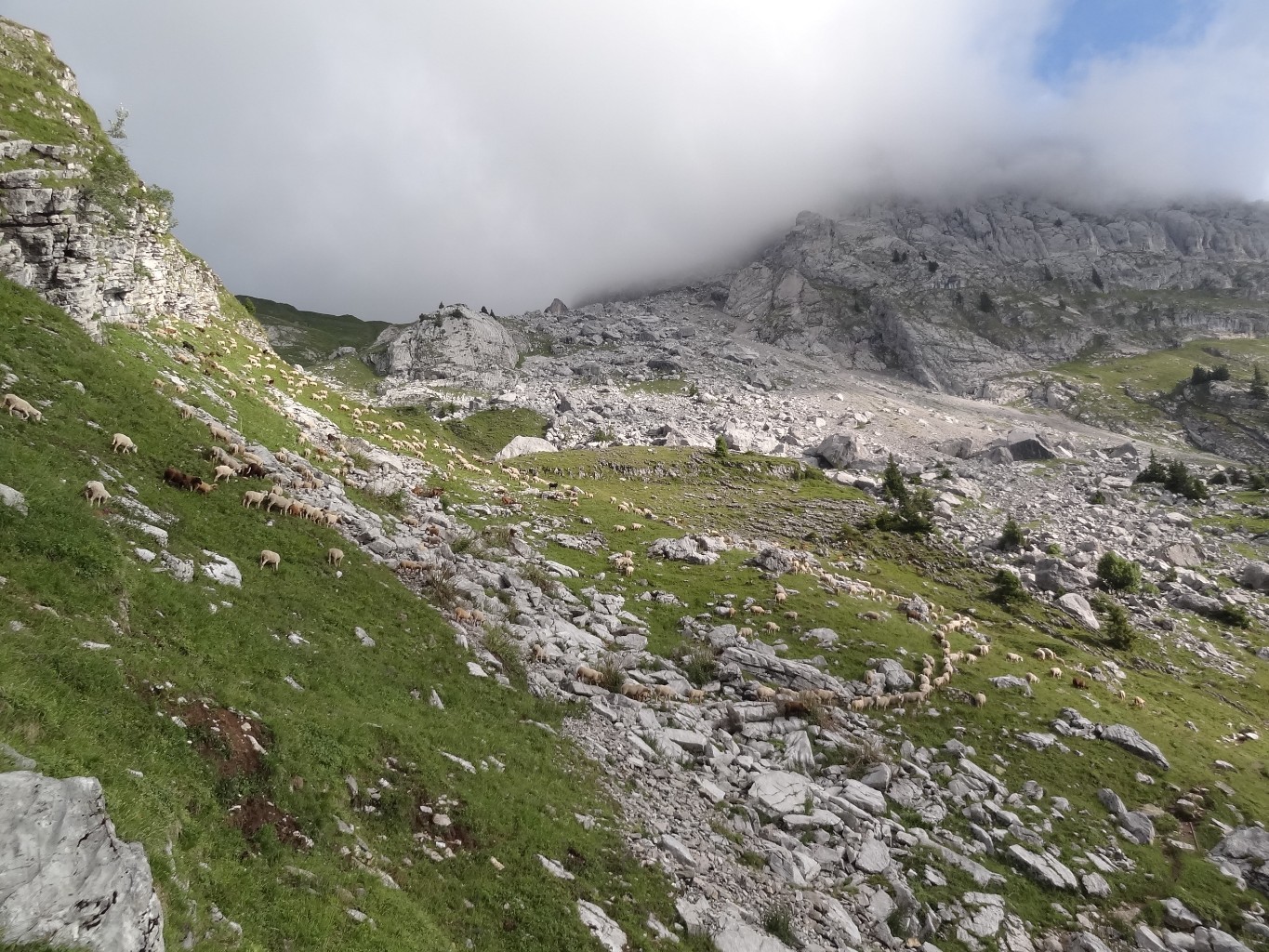 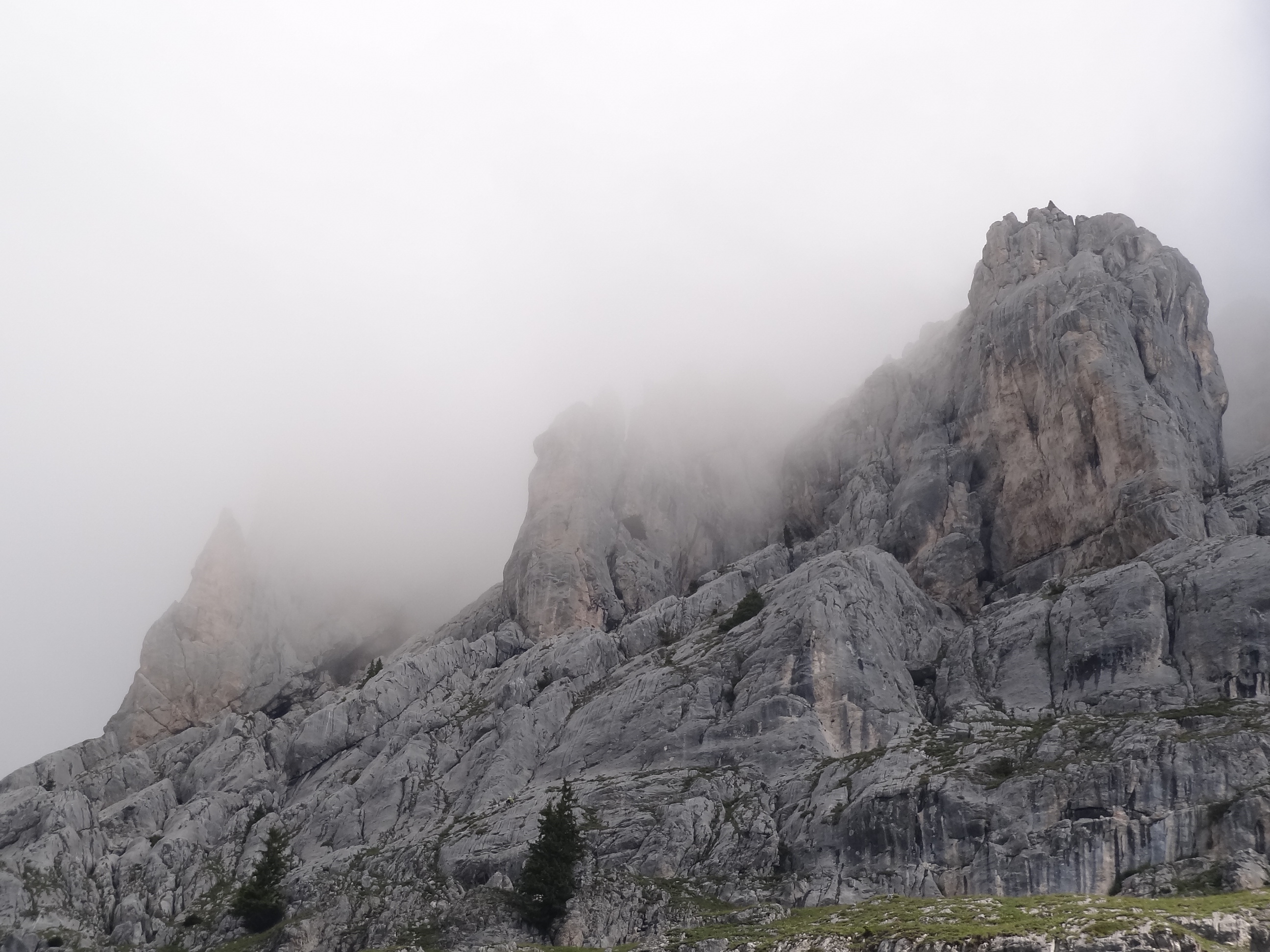 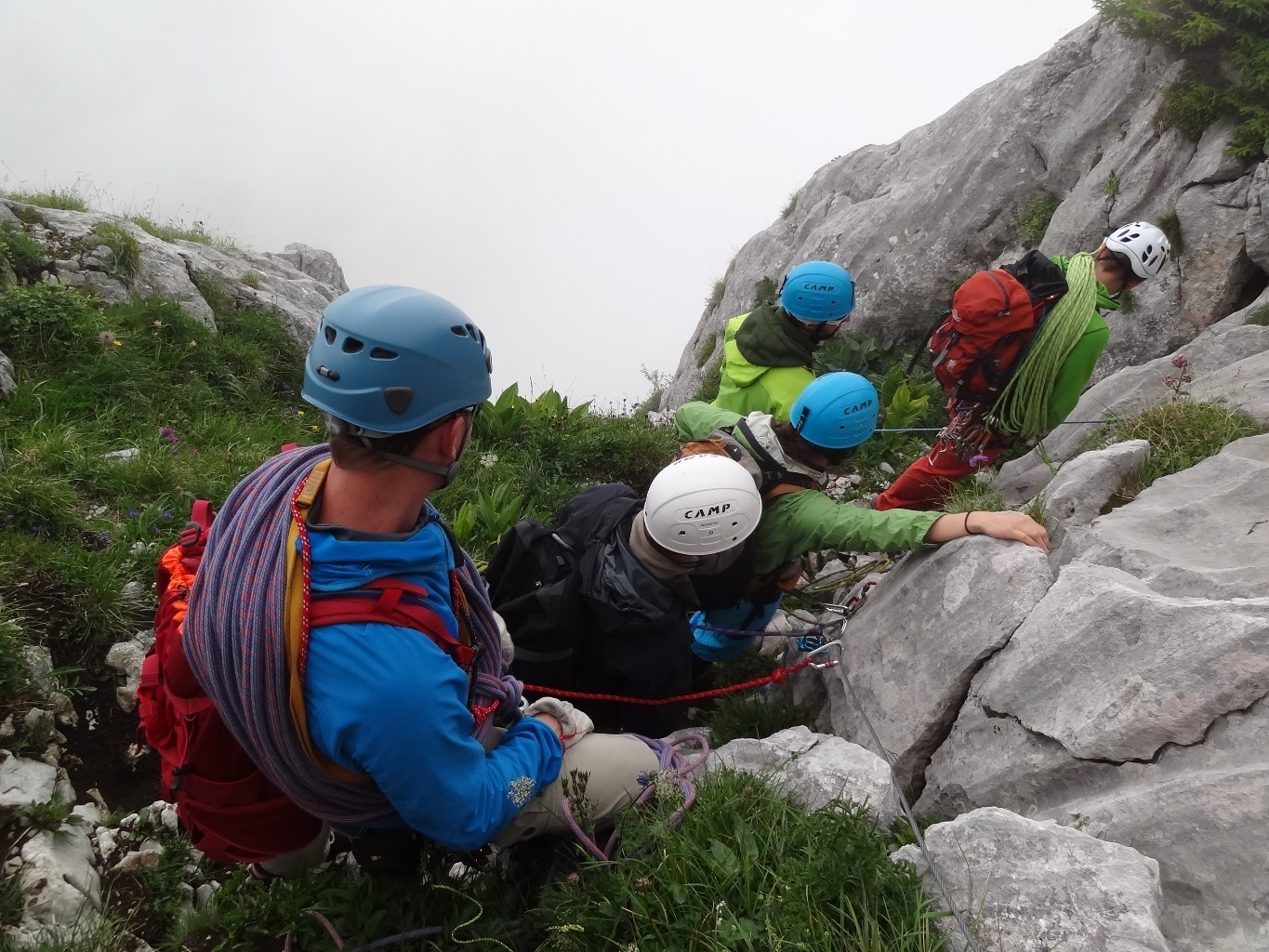 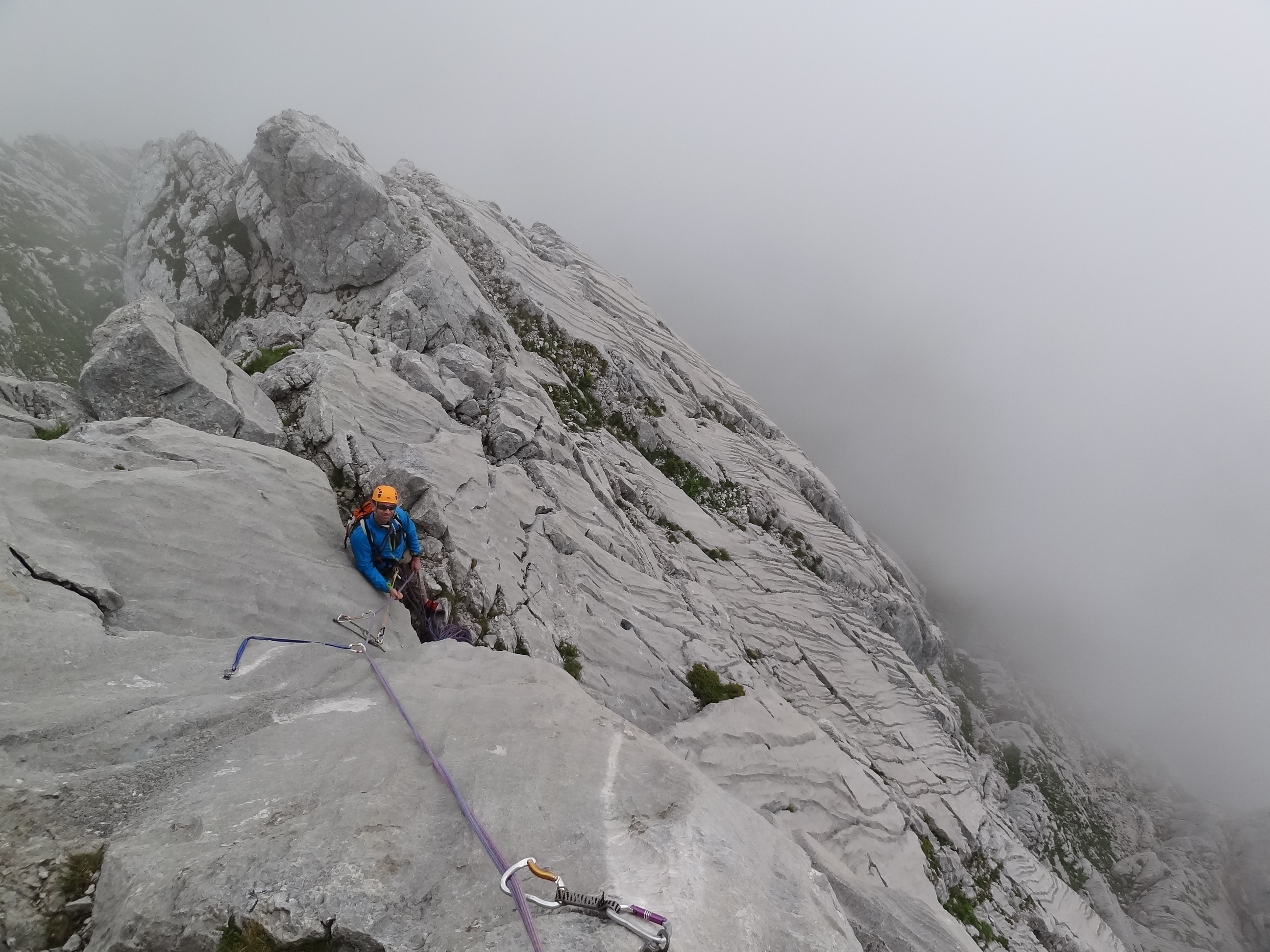 From the Col de la Colombière, follow the Lac du Peyre path to the Colombière chalet, then take a path to the NE, which first descends, towards the Montarquis caves. The three pillars of the “Pointe Est du Midi” or “Dzerat” are clearly visible. 600 metres after the chalet (alt 1700m) and at the level of a large block, take a path to the left (signpost “site d’escalade”), which initially goes parallel to the other path before climbing into a little valley, (cairns). At the top of this little valley is a little col marked by a land slippage. From here follow a faint path to a yellow rock barrier which one turns on the right by taking a gully (cable) situated behind a pine tree. From there, take a network of steep and stony ledges to the start of the route on the left. (1h)

Belay at the foot of the route just to the right of a deep and stony chimney.

L#1 | 5c | Climb the big slab with the crux at the level of a crack. L#2 | 2 | Pitch linking to the foot of the next pitch at the level of runnels (“cannelures”) L#3 | 4b | A slab with lots of runnels, going to the left to the belay. (Do not confuse with the belay on the right that is on the route “Gants rouges du cardinal”). L#4 | 5a | Follow a crack, passing the arch on the left.
L#5 | 5b | Straight up L#6 | 5b | Go rightwards to pass a short vertical wall. The belay is shared with “Gants rouges du cardinal”. L#7 | 5c+ | The most technical pitch. After a nice slab go to the left and climb a runnel in a vertical section. A difficult move to exit.

From the final belay, go to the right to find a belay point with bolts linked by a chain. First abseil is about 40m The climb down the rock to find a second abseil point which leads to a large grassy and stony gully

From there descend towards the rock (centre right of the gully) for several tens of metres (pine tree straight ahead to guide you, plus a faint path and cairns). Find a red mark and scramble rightwards over the rocks, (paint marks and mud from other people) to find a first cable, then a second a little after which leads to the last abseil point. A 50m abseil arrives at the foot of the cliff. On the last part of the descent, you cross the first belay and first pitch of “Gants Rouges du Cardinal”. From the end of the abseil follow the faint path southwards and descend to join the approach path.

There are other possibilities to descend but the above option is most practical.