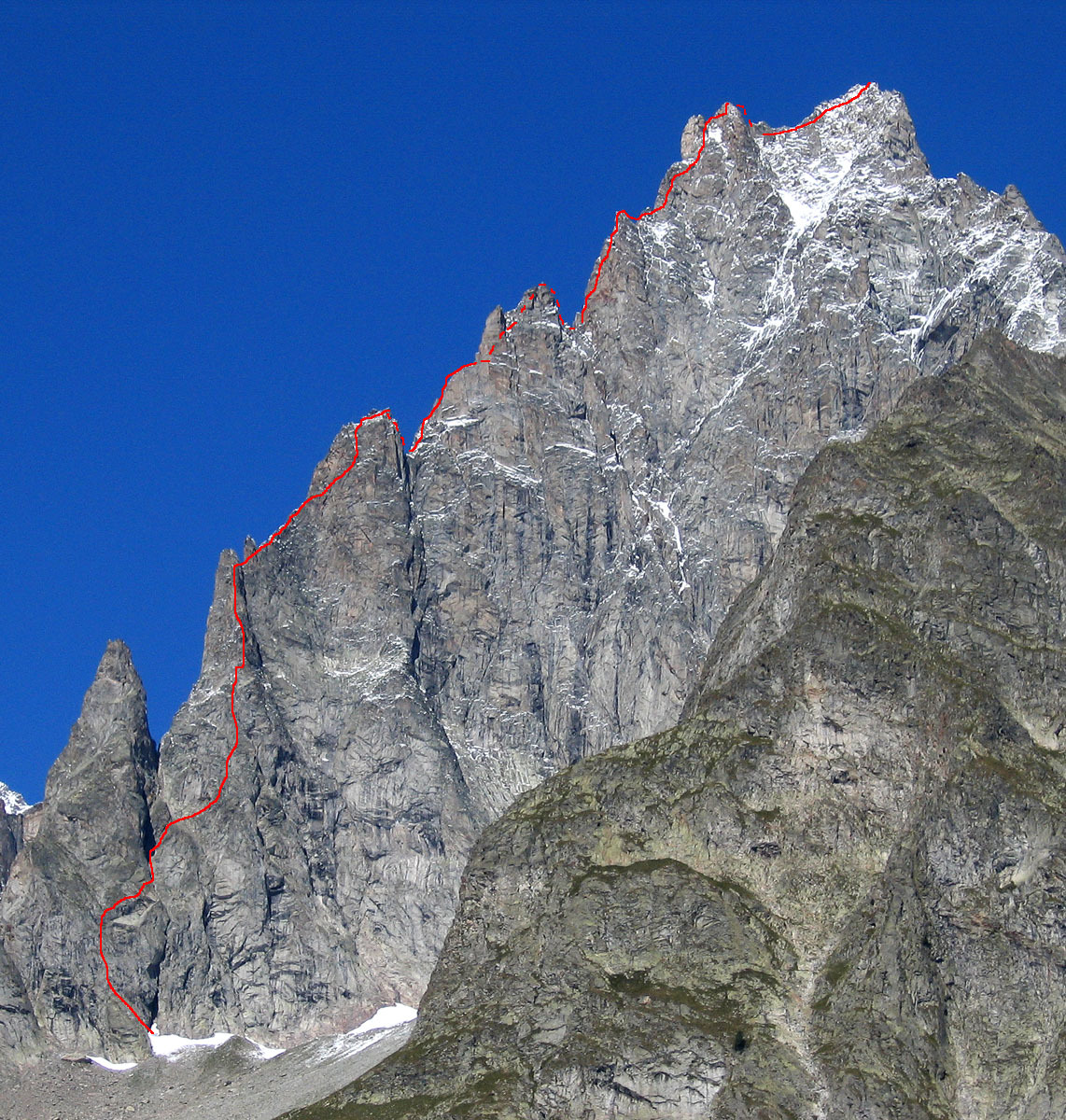 “A name of legendary quality, a ridge profiled against the sky, a great reputation, magnificent climbing – all these are characteristics of the S ridge of the Noire and combine in a route from which dreams are made.” These words from Gaston Rébuffat (in 100 finest) are still true today! The ridge is separated into numerous towers : Col des Chasseurs, Tête des Chasseurs (2802m, short slab climbs of 100-150m), the Pointe Gamba (3069m), Pointes Bifides, Pointe Welzenbach (3355m), Pointe Brendel (3497m), Pointe Ottoz (3586m), the Pointe Bich (3753m) and finally, the summit of the Noire de Peuterey (3773m).

From the Borreli hut (2316m), Go W to the foot of the pointe Gamba (at 2675m) by climbing up a grassy dome via the moraine and then diagonally up a scree slope (faint path and a cairn.) The start is 20m to the left of a chimney/gully separating the Pointe Gamba from the Pointe Bifide (commemorative plaque.) An old fixed rope is in place.

Pointes Gamba - Bifides 3069m Climb the grassy rocks going slightly leftwards (3c, 60m) to reach a steep black slab to the right of a small shelf. Go to the right on the slab (4c, 1 peg) and continue, rising to the left, for 60m to gain some grassy cracks. Climb these cracks and traverse to the right above a large white triangular slab, visible from the hut. Gain the gully coming down from the gap to the north of the pointe Gamba.

Climb this easy gully separating the Pointes Gamba and Bifide. After about 60m when the gully forks (Y shaped) go obliquely right, pass a shoulder and traverse horizontally to reach the foot of the Pointes Bifides. Climb straight up some steps (40m), then climb a flared gully going slightly diagonally left. (3c, 50m). Go obliquely left for 30m on a sloping slab and return easily to the ridge on the right.

Follow this ridge until the foot of an easy angled buttress. Climb the corner to the left (4c, pegs). Go onto the E face for a short time to overcome some steep slabs (4c). A last wall of 4c leads along the ridge. The 3 belays for these pitches are equipped. Follow the ridge and force a short, slanting step (5c or a short ladder). By a slab on the right (4c) reach the first Pointe Bifide. Climb down to the gap between the Pointes Bifides then several metres more on the E face and traverse to the second Pointe Bifide.

Pointe Welzenbach 3355m Take the easiest line along the ridge and bypass by climbing down to the E the next pinnacle (altogether 3c,4b airy.) Continue along the ridge until a bolt belay. Rising slightly, continue to the right on the S face of the Pointe Welzenbach (40m, 3c, a few pegs). At the level of a terrace do not climb a slab on the right but climb a steep wall directly above the ledge (4c, 10m, Welzenbach slab). Continue up the flared corner (3c, 4b, 60m) until the ridge. Briefly follow the ridge then before the summit of the Pointe Welzenbach, climb down on the right, (looking downwards) to reach a belay on the E face. Abseil 25/30m to reach the next gap, (possible with 25m, more comfortable with 30m). 3-4h Place for a bivouac at this gap.

Pointe Brendel 3497m Start the climb of the Pointe Brendel by its right flank (30m). Come back to the crest of the ridge by an easy angled slab clearly visible from the abseil from the Welzenbach (3c, 30m). Reach a zone of little ledges on the W face 10m below an obvious gap. Climb the “half-moon“ shaped buttress by a steep wall with cracks. Climb firstly to the left then slightly obliquely to the right (4c, some pegs, 40m). By the ridge, reach the foot of a steep step under the Pointe Brendel. Climb down the W face a few metres and then climb back up in the direction of a steep, black corner some metres to the left of the crest of the ridge. Climb the corner (4c), then the slab which follows (5b, 3 cemented pegs), and traverse to the left under some overhangs (40m). Overcome a few metres still steep and gain by an easy section the summit of the Pointe Brendel to the left Good places for a bivouac

Alternatively from the gap: Climb directly up a steep step several metres to the left of the crest of the ridge by a crack (5+, lots of pegs) or avoid this step by passing under the W flank to rejoin the some steps/ledges. For the “half moon”, start 10m under a little gap and climb a corner with cracks (4, 5). Gain a little sloping platform (5, numerous pegs) and continue by climbing to the left, coming back slightly to the right and then taking the easiest line to the ridge which allows one to climb without difficulty on the left to the summit of the Pointe Brendel.

From the summit of the Pointe Brendel, abseil 25m to reach the ridge. Bypass a large pinnacle on the left (beware of the large, balanced block,) and climb a red chimney to reach a little gap at the foot of the Pointe Ottoz.

Alternative from the gap: Climb the steep wall above the gap, firstly trending slightly leftwards then trending slightly rightwards (5c, 35m, pegs). Belay on a little step. Climb the wall above the belay. One can go to the right (5c, 20m) but to the left is less committing. Belay on a little shelf to the left. Several short steps separated by ledges leads to two good bivouac sites. Bypass the summit of Pointe Ottoz by some cracks on the E face, 30m.

Follow the ridge and descend to the gap before the Pointe Bich (30m).

Pointe Bich 3753m Follow the ridge passing several “rock teeth” (4c, 60m) to reach the foot of a steeper buttress. Start climbing to the right of the crest by some cracked slabs and little overhangs, slanting up slightly to the right (5c, numerous pegs, 30m). Continue obliquely rightwards in a corner (4c, 20m). Come back to ridge on the left by a sloping slab. Follow the ridge, 30m, until a section of ledges. – 2 good bivouac sites. Climb the cracked slab in the middle of the spur (4b, 30m). Traverse rightwards in a area of large boulders to reach a loose gully. Climb up this gully to the crest of the ridge on the left. Traverse 10m to the right, climb a chimney, (3m of 3c) to regain the ridge which you follow (2m of 4) until the summit of the Pointe Bich.

From the Pointe Bich, descend to the next gap by a first abseil of 30m to reach a little terrace, then a second abseil of 20m or steep down climbing (5m) followed by a damp earthy/snow gully of 10/15m.

By the E ridge. http://www.camptocamp.org/routes/56163/fr/aiguille-noire-de-peuterey-arete-e