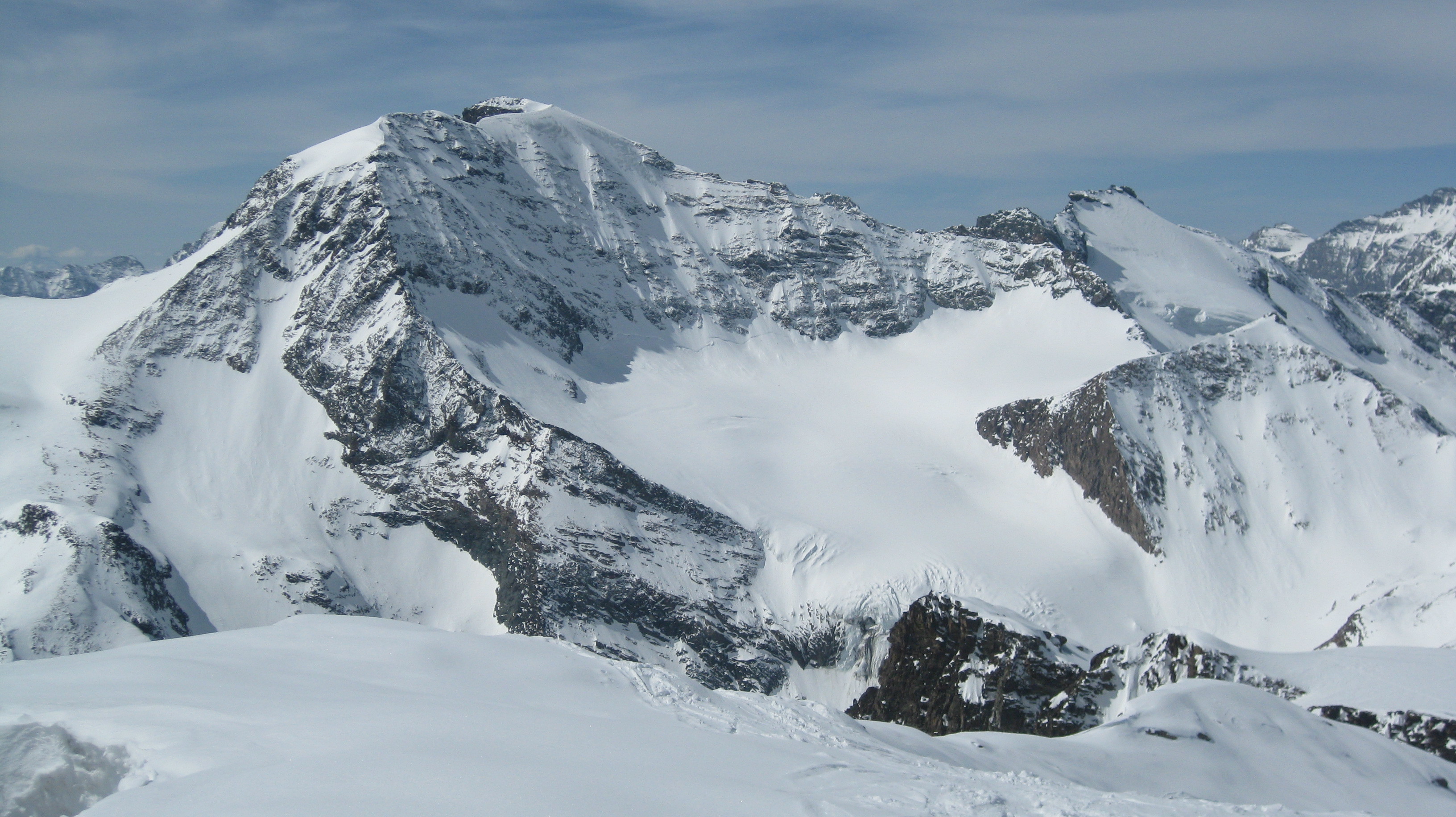 Superb glacial wall with a regular slope at 45° then long sections at 50/55°. Ideal route for becoming familiar with the large faces and the large glacial corridors. Unlike the Couloir des Italiens at Grande Casse, this face is not exposed to serac falls.

Day 1: Climb to the Évettes refuge: After the Ecot parking lot (2020m) take the well marked way which goes up the south slope via large bends. After going up these large avalanche slopes a large traverse to the left leads you to a small herbish flat spot. The way is divided into 2, a path traverses and easily climbs to the refuge while the second directly climbs the slope above, reaching a broad dale and to the refuge via a traverse to the east. From Ecot to the refuge takes 1h15 to 2h00.

Day 2: Go back down the flat spot under the Refuge and head for the Évettes glacier. Once on the glacier go up the first slope often in ice (25°) then traverse diagonally to the left (towards the right bank of the glacier) to avoid a slightly threatening serac area. Via snow slopes at 30° it is easy to reach the higher dish of the glacier. Head south-east for the glacier which climbs to the Tonini pass just to the left of the summit of Petite Ciamarella. Go up the slope which recovers gradually until approximately 45° under the Tonini pass. Go past the pass and traverse east until the foot of the north face of Grande Ciamarella. From the refuge to the start takes 1h30 to 2h00.

The snow and ice slope can be climbed via three routes of varying difficulty: -Pass the bergschrund under the first rocky patch located exactly above the bergschrund, go around it on the left and go up the regular slope at 45° to the right above. The slope becomes steeper under the top reaching 50°. Once on the ridge continue easily as far as the summit then to the cross. -Pass the bergschrund further to the left, just to the right of the rocky edge which bars the face vertically. The slope is initially 45° it quickly becomes 50° then 55° at approximately 150 m. Under the ridge go to the left to easily reach the summit. -The last solution is to cross the bergschrund on the left of the rocky edge described above and to go back up the steep corridor (50°) until arriving under the summit serac. Cross the serac via 2 vert steep short pitches at 65° to 75° before reaching the summit. This route should only to be undertaken if the ice conditions are good and if the serac is not threatening. From the bergschrund to the summit takes 1h30 to 3h30.

From the summit go down the ice cap and get a foothold on the snowy ridge which goes to the west. This ridge becomes progressively narrower until it reaches the pass of Ciamarella. Do not hesitate to go over to the Italian side (left-hand side of the ridge). From the pass, a steep snowy or mixed corridor (40/45°) makes it possible to descend the north face. This descent may be difficult, spikes can be used to lay a rappel if need be. A bergschrund may form at the base of this corridor, it is avoided via the left bank. Once on the Tonini glacier, you reach the Tonini pass and refuge via the uphill route. From the summit to the refuge takes 2h30 to 3h00.

This wall is liable to the abrupt changes in weather due to the fact that it is on the border with Italy.

It is possible to choose the difficulty of the climb based to the route used. The face is 500m high, staying concentrated and maintaining the distance are the two main difficulties of this route.

The face is broad and the view free from all obstacles, take advantage of the landscape.

This wall is a popular choice for steep skiing, but optimum conditions are advised (first ascent by Y.Anselmet in the 1970s).

Access: Go up the valley of Maurienne via Modane and Bessans and continue until Bonneval sur Arc. In Bonneval at the entry of the village, in front of the tourist bureau take the road which descends on the right and cross a bridge on the Arc. An asphalt road leads to the village of Ecot.