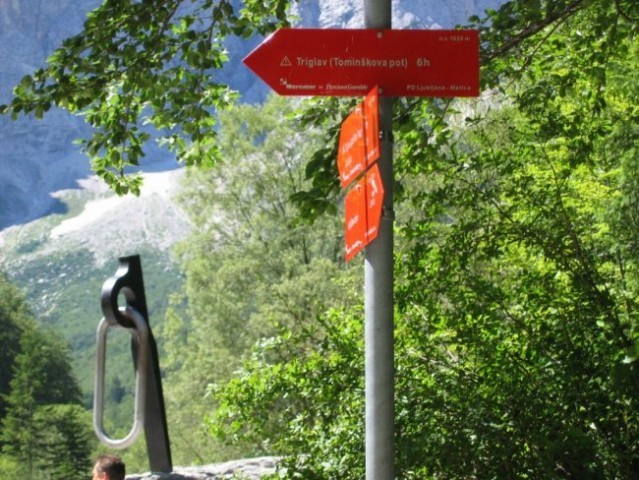 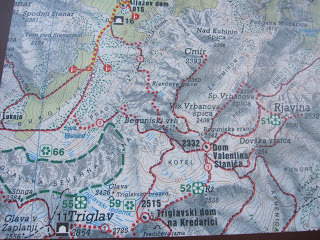 This route is more direct (a little shorter) and more difficult than the route by Prag which is recommended for the descent.

From the parking area at the end of the Vrata valley, continue on foot in the same direction for approx. 5min, to the valley accomodation (the second building, on the left). At the valley accomodation Aljažev dom, continue up the valley along the forest road. Signposts (among others): Triglav, Triglavski dom, Kredarica. At the monument (an enormous carabiner and piton), turn left, signposted Tominškova pot, and cross the sometimes dry creek.

The first part of the route is in the woods. The slope soon becomes demanding, but the path is always well secured and marked. After the upper limit of the forest, beautiful views open, notably on the N face of Triglav, but also towards the Škrlatica on the other side of the Vrata valley. The track then becomes completely rocky and almost completely secured as a via ferrata. It is then only promontories, airy ledges and dramatic gullies (snow at the beginning of the season), the exposure being sometimes notable. After having twisted in and out, the path ascends along the foot of the walls of Begunjski vrh, up to a water point (weak at the end of the season), at alt. approx. 2100m. Junction with the route by Prag which enters on the right, along the scree field.

Above the water point (weak at the end of the season), the path continues following the scree field. Soon, the marked path to the Dom Valentina Staniča branches off to the left. Continue to the right along a now karstic terrain (in case of fog, follow the marks scrupulously), and possibly some very easy snow fields. Shortly before reaching the high plateau Kredarica where the Triglavski dom hut is perched, two paths are possible, both marked, no matter.