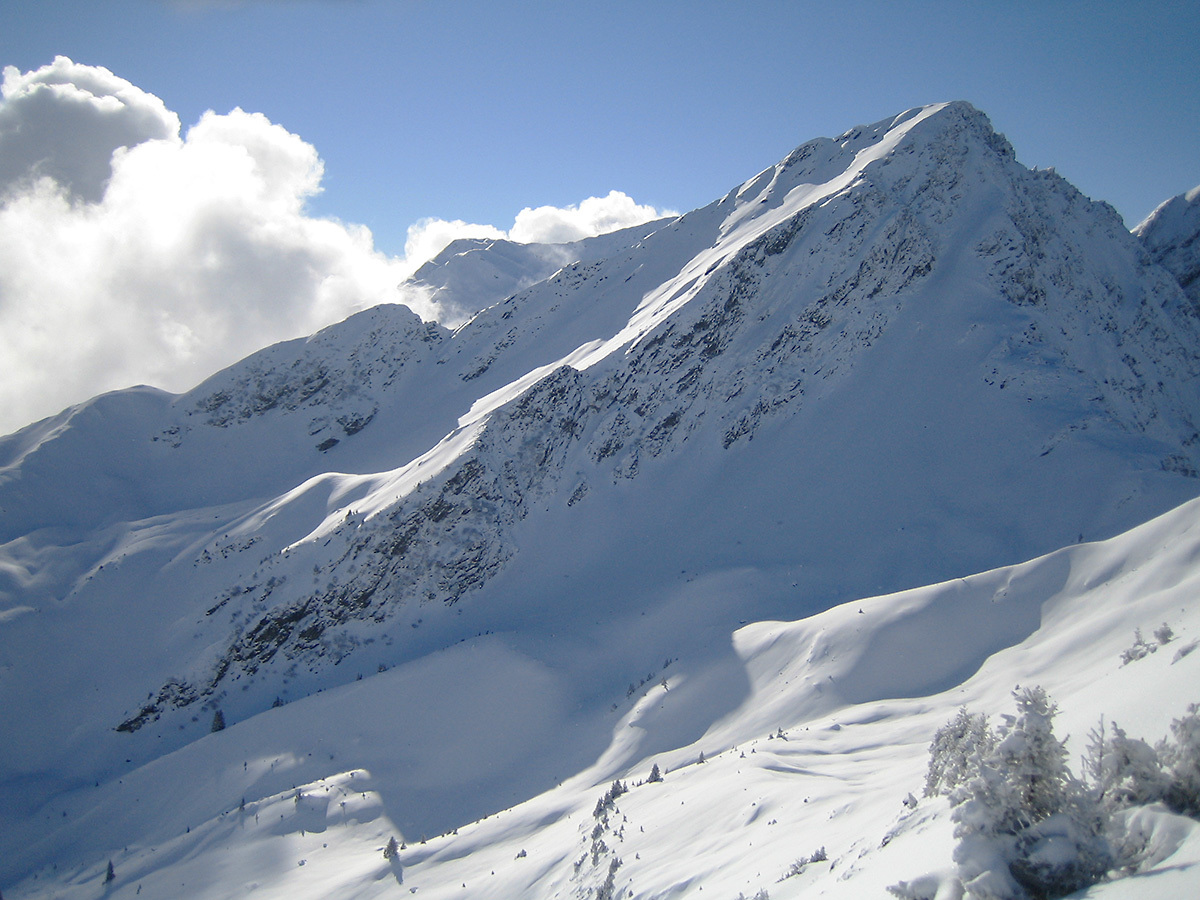 Climb: From the hamlet of Frasse, climb the snow slopes by following the route of the summer trail, along a spur until the following hamlet, the Maisonnettes, from where you can also leave in the event of insufficient snow cover. Follow the trail going towards the left, which crosses the agricultural track several times, until the Reposoir chalets.

Go up the inclined slope above, that generally is traversed from left to right until reaching the place called Chatelard (1412m, very pretty typical chalets). Continue the right slopes to the upper part, via the high mountain pasture of the Crozat where a track is traversed, then slightly towards the left until a second track. Go up on the right of the chalet towards a flat area (peat bog), located below Lac du Clou (1680m). go up right in the forest, on the summer trail. At the altitude of 1750m, go diagonally towards the left (South), and go up in the forest clearings, in front of the lake at 1805m until the flat rock plateau. Traverse it in a southwest direction. You can then easily reach the summit directly by the eastern slope, until reaching a shoulder. It is then often necessary to take off your skis for the last fifty meters. It takes 2 to 3h.

Descent: follow the southwest ridge in the direction of Roche Plane pass. You can then choose its slope between the summit and the pass, depending on the snow conditions. (from S4 under the summit to S2 near Roche Plane pass). It is then possible to return to the side towards the northeast, to Roche Plane plateau to reach the ascent route. A third possibility involves descending until the lake 1797m, then to go up the bump 1918m completely to the south, descend completely to the east, then follow the forest clearing to an altitude of 1700m, until Plan Villard (1546m). Continue northeast until the Blottières chalet (1430m), then through the forest via the summer trail until Châtelard (another Châtelard). Descend the large slope along the edge on the left to arrive at the road above the holiday centre (Carroz Dessous), that you follow towards the north to reach the vehicles at Frasse (300m).

Descent variant: It is possible to descend by the same route, it takes 1h.

It is possible to reach Maisonnettes by car, in the event of insufficient snow cover or if you want to shorten the route, which reduces the HD by 100m. In the latter case, you must return by the ascent route and not via the Plan Villard variant.

The slope of the south-western ridge has to be undertaken with a quite stable snowpack. The traverse under the summit, between the point 1787, and the plateau of Roche Plane (Lac Couvert) are exposed to the slab avalanches in winter, or ground avalanches in spring.

This tour is classic and often followed.

Access: Albertville -Beaufort -Arèches - When you leave the village, follow Les Carroz, cross the hamlet by leaving the sign “les Carroz Dessus”on the left, park at Frasse, at the intersection of the road leading to Maisonnettes.