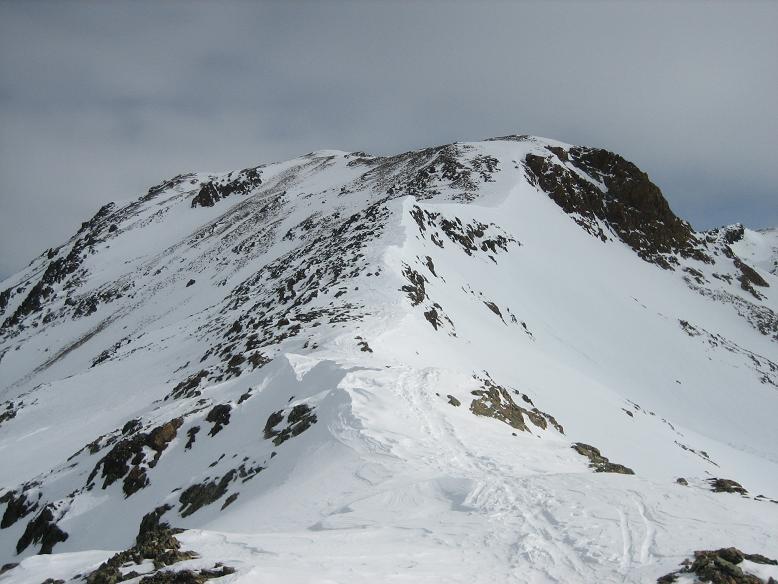 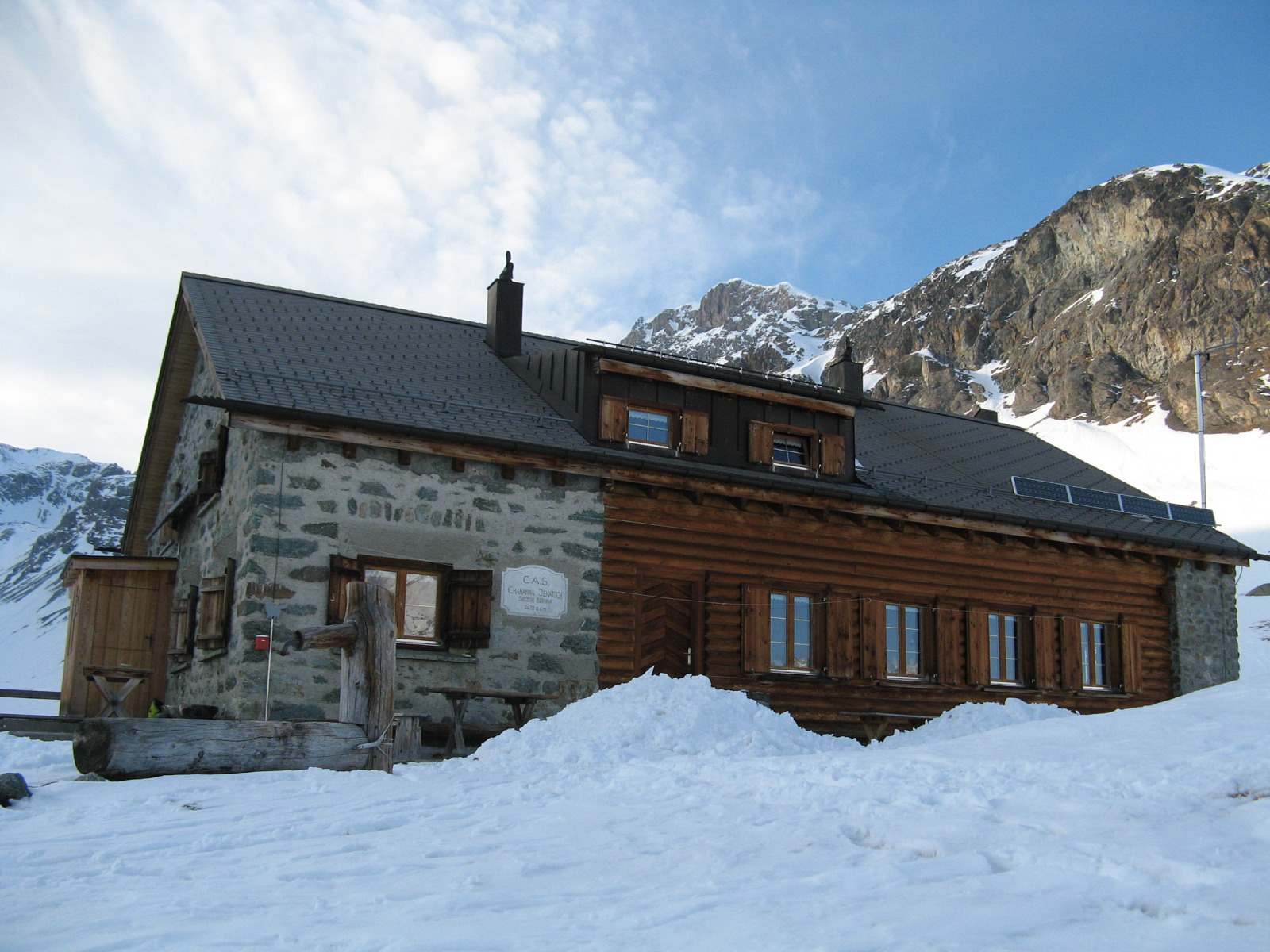 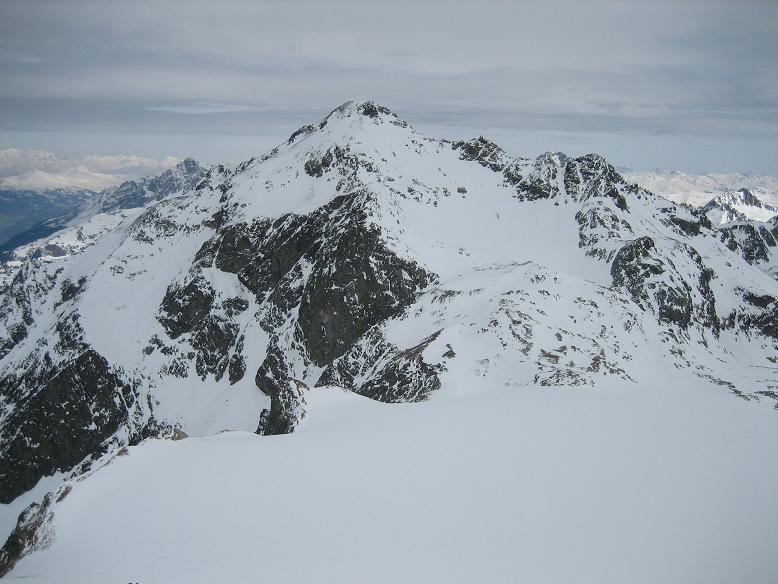 Day 1 -Traverse of Tschima da Flix and descent on Chamanna Jenatsch -5h -around 10 km. Go up Val d’Agnel (towards the N) via gentle slopes while remaining on the orographical right bank of the water-course (without name) until the Fuorcla d’Agnel (2983m). After a short descent of about forty meters, head completely W on the Vadret d’Agnel until Fuorcla da Flix (3065m). Follow the summit ridge (towards the N) as far as the summit of Tschima da Flix (3300m). Splendid over the 3000 surroundings and Bernina massif.

You reach the E pass via a short descent over a steep and exposed traverse (outcropping rocks) then, on Vadret Calderas, pull to the right (towards the NE) skirting the N slope of Piz Picuogl. Remain on the right bank of the glacier until the flat area located near spot elevation 2963. Then traverse the glacier to remain on its left half and reach the flat area which leads via the SW to Chamanna Jenatsch (2652m).

Day 2 -Traverse N-S of Fuorcla d’Agnel -2h30 - around 8 km Roughly follow the level line of the hut which skirts the E face of Piz Picuogl then go up Vadret d’Agnel (towards the N) until the Fuorcla d’Agnel (2983m). Redescend Val d’Agnel completely to the S while remaining on the right bank of the water-course until the parking lot. Possibility of descending combined with the ascent of Piz Surgonda (3196m) by going up its SW slopes around 2700m or with the climb of Piz Campagnung (2826m) by going up its E slopes around 2600m.

Notes: if you plan on staying several days in Chamanna Jenatsch, a variant of the described route involves directly descending to the hut from Fuorcla d’Agnel the first day. You can then reach the summit either by Vadret Calderas, or by Vadret d’Agnel and Fuorcla da Flix.

Tschima da Flix has also been done round trip in a day from the Julierpass road. Two disadvantages however: the S ridge of Tschima da Flix is not very pleasant to ski down (exposed to west wind, often little snow: be careful of your skis!) and it is necessary to put your skins back on for the return to Fuorcla d’Agnel.

Chamanna Jenatsch is the prototype of a refuge serving as a base camp for ski touring under the stars. The summits surrounding the refuge are the aim of many ski tours and allow numerous combinations. The most skied are: Piz Traunter Ovas (3152m), Piz Surgonda (3196m), Piz d’Agnel (3205m), Piz Jenatsch (3250m), Piz d’Err (3378m) and Piz Caldera (3397m).

The starting altitude allows a good snow cover and avoids carrying your skis until late in the season.

The described route proceeds primarily on gentle slopes (S2) and is fairly safe. The S ridge of Tschima da Flix presents some short narrow sequences but they do not require carrying your skis. A short steep slope (~S4, with outcrops of rock) under the summit. The descent of Vadret Calderas is S3 if you take its central part (if the glacier is closed).

NE for the principal part of the descent (Vadret Calderas). If not, S for Val d’Agnel and the ridge leading to Tschima da Flix, E for the slopes leading to Fuorcla da Flix and N for Vadret d’Agnel.

Access: from the north: Chur > Motorway A13 towards San Bernardino, exit Thusis south, Tiefencastel > Bivio > Julierpass (open in winter) from the south: St. Moritz > Silvaplana > Julierpass The start (2200m) is a little to the W of Julierpass under the place called “La Veduta”. There is a parking lot on the left side of the road coming from Bivio, just opposite the entrance to Val d’Agnel (obvious). The Julierpass road is served by postal coaches. One stop is at La Veduta. Schedules on http://www.cff.ch/pv/index_f.htm.

Accommodation: Chamanna Jenatsch (SAC, Sektion Bernina, 2652m). 60 places. 21 CHF for alpine club members. 27 CHF for non-members. Attended generally from: Christmas to Epiphany, from the beginning of February until the beginning of May and from July to the end of September. Winter refuge not attended: small equipped kitchen (crookery, pans…). Ski place with wood and axe. A open dormitory with 18 sleeping mats + blankets. The caretaker Robert Hofer, nice and helpful, speaks French. All information on http://www.chamannajenatsch.ch/ (in German and French).