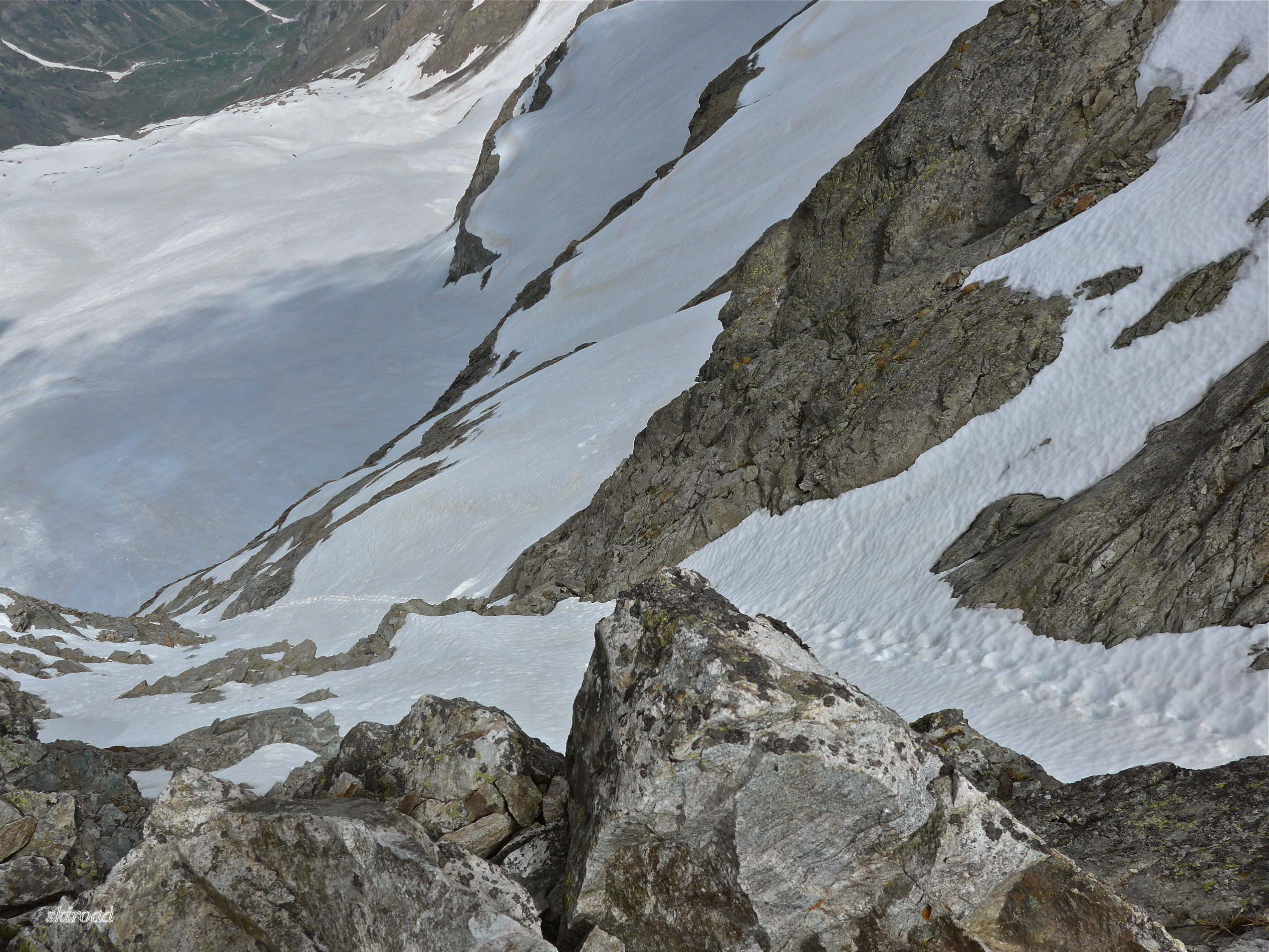 Climb 1: Follow the road until the bridge 1649m. Leave the road to remain on the right bank and again rejoin the road at point 1689m. Follow it until the bridge under the madone refuge 1850m. Go right along the torrent and pass in front of the Madone cow barns. Climb the slopes still on the right of the torrent until a flat area (Gias Cabret 2065m). Enter the Cabret dale then towards 2250m climb on the left via beautiful slopes leading to a flat area (Lac Balaour 2342m). Climb the slope which follows on the right to reach the Lac Cabret 2485m. Go up the dale which passes under the rock bars of the Risso Cabret, and which leads on a flat area to 2950m (the Terrasse du Gelas). From there, go up the S scoop to the balcony of the Gélas 3085m.

Descent 1: From the balcony, take the rock ridge in the direction of the Chaffrion to reach the summit of a corridor (Couloir des Italiens). Depending on the snow conditions, descend the shoot on skis or foot (crampons, ice axe and rope) (45°/50° over 200m, bars downwards on the right). At the bottom of the corridor you take to the Glacier de la Siula on the Italian side, follow a succession of very beautiful broad slopes, while going completely to the left towards the Cresta della Maura. Descend to 1850m slightly uphill from Dado Soria refuge.

Descent 2: From the corridor descend directly on Lac de Fenestre 2266m then via gentle slopes you reach the Madone dale slightly underneath Gias Cabret where the ascent route is found.

Depending to the snow cover on the Madone de Fenestre road, the HD varies between 2300m and 1800m. In general, cars are left at the bridge 1496m or 1572m. Long all day route if you have to start from below in the dale of the Madone.

The Couloir des Italiens represents the difficulty of the route. 45-50° over 200m. Light snow cover and rocks can be present in the high part of the corridor. It is also possible to continue the ridge towards the Chaffrion and to take a diagonal ledge which reaches the Couloir des Italiens in its lower third inferior part, it is quite steep and exposed above to bars. Alpine route to be undertaken only with well stabilised snow. Risk of plate on the N slope of the Gélas. Danger of avalanches when ascending the Fenestre pass (coming from the left bank).

Access: Nice -Vallée du Var until Plan du Var. Then take D2565 (Vallée de la Vésubie) until St Martin de Vésubie. Just after the square in St Martin, on the right take road D94 Madone de Fenestre. Follow it until it ends. This depends on the snow cover (between 1300m and 1850m).