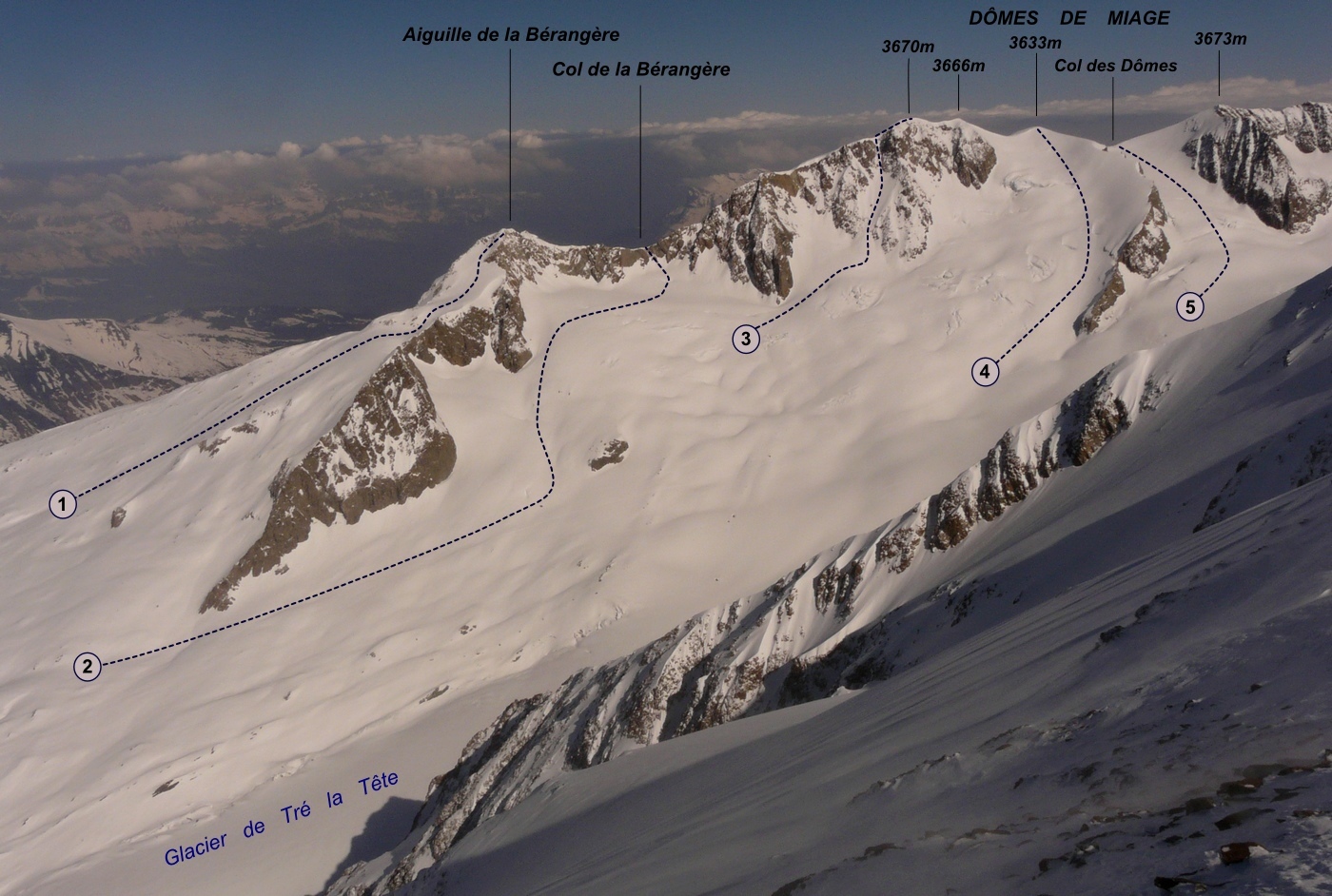 From Cugnon follow the summer trail of Tré la Tête hotel (via Les Plans). Altitude 1970 m. 2h00. Continue on the SE side which dominates Glacier de Tré la Tête arm and climb up 70m of HD. Go towards the flat area and then go down to reach the base of the final arm of Glacier de Tré la Tête. This place is known as Mauvais Pas. It is often necessary to take off your skis. Then go back up the centre of the glacier then its right bank. At the level of the ramp marking the ascent trail to the summer refuge, go towards the rocks to avoid a zone of crevasses (seracs of Tré la Grande). You arrive on a flat area that you go up for a distance of 200 or 300m. Here you can see the roof of the refuge on the true right bank of the glacier perched 200m above the glacier. You reach it by one of two snow bowls. One is located before the spur on which the refuge sits, the other is located after the spur (less steep than the first). It takes 2h30 from Tré la Tête. Altitude 2605 m.

Warning: on the old maps, the refuge indicated is the old Conscrits refuge (at 2730 m, 750 m further to the east than the new one). The old refuge was demolished.

From the Conscrits hut, follow the route for the Dômes de Miage. This traverses whikle slightly ascending to the foot of the S spur of the Pointe des Conscrits (direction NE). Pass the base of the spur at about 2750m to 2800m and continue the traverse to come under the Aiguille de la Bérangère. Go up a cwm by its true left side towards the Aiguille de la Bérangère until about 3100m. Pass under the aiguille to reach a little bowl. The col is to the right, and is reached by a gully leading to a narrow gap. Start the gully at about 3250m. Climb it with skis as high as feasible under a rocky narrows. Put on your crampons to climb this narrow section in the rocks, (rope could be useful, peg in place 3/3+). Exit to the col (3348m) by a narrow snow gully at 45 to 50°. From here you can reach the W summit of the Dômes de Miage 3670m without major difficulties. In which case you rejoin the descent of the Armancette glacier directly from the summit.

NB : For those doing the the route in one day or from the Tré la Tête hut, one can continue up the Tré la Tête glacier without going to the Conscrits hut, reaching the ascent route by the S slopes at the level of the S spur of the Pointe des Conscrits.

From the Bérangère col traverse to the right to pass the bergschrund and take the true right side of the glacier to avoid a large crevasse, then come back to the left , then right, slaloming between the crevasses, (S3). Ski down the sustained slopes (S4) until a rocky spur at about 3000m. Traverse to the right (E) under this spur: either, directly to reach the slopes above the Point de Covagnet. Descend a large slope (S4) towards the Pointe de Covagnet ; or, ski down a cwm until 2770m then make a traverse, first rising then descending, to reach the Pointe de Covagnet. Next descend the SW facing slopes. At about 2500m go down a gully (S4) leading to a flattish area (2320m). Pass to the left the start of a little moraine and ski down a large slope (S3), keeping as far right as possible to reach a little shrub filled gully above the Armancette lake (1700m). From the Armancette lake, cross the fields to reach the path in the forest. Follow this, always on the true right bank of the valley, leading to Cugnon, (1450m) on the road just S of Contamines.