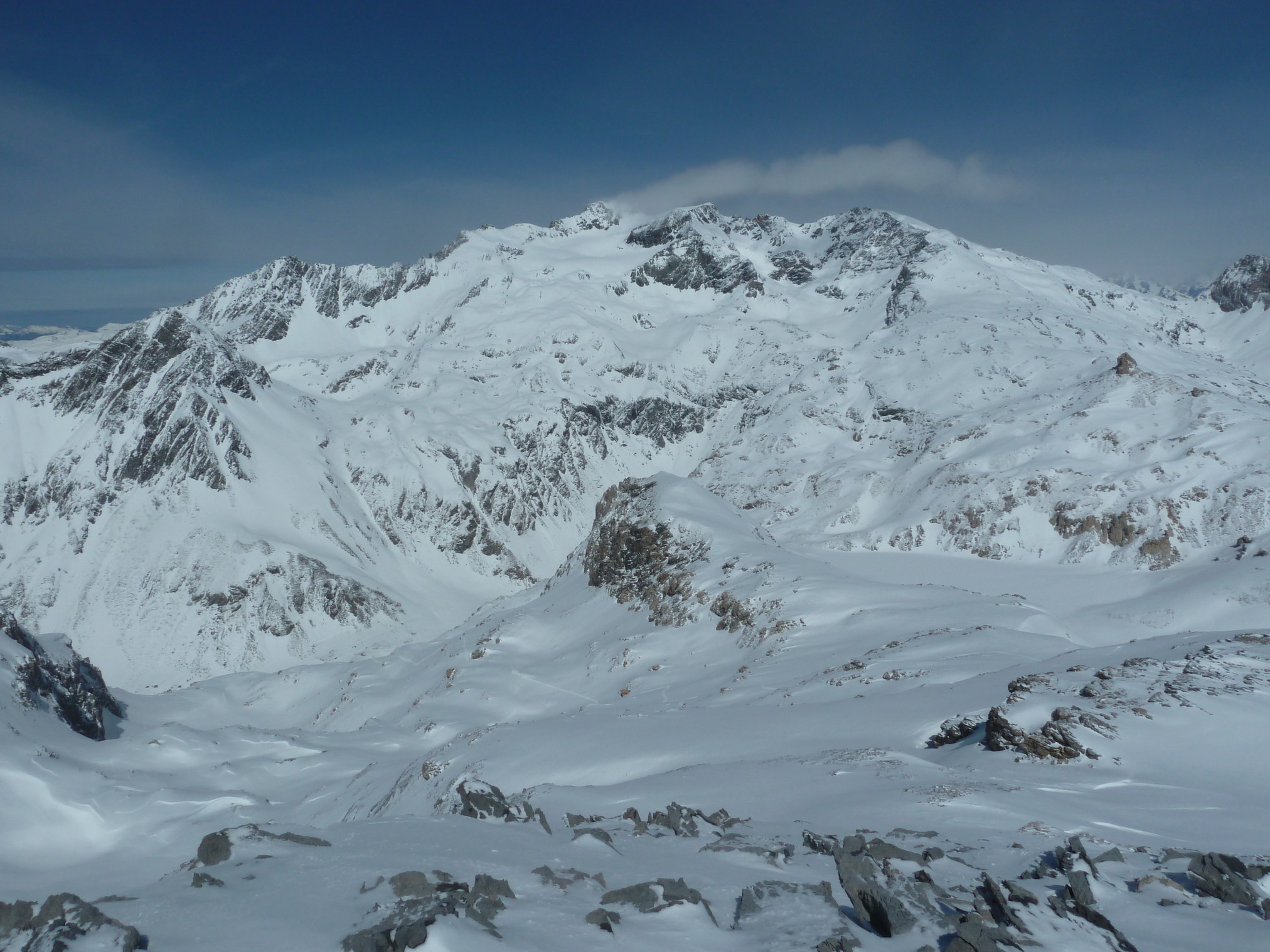 1°) Via Le Laisonnay: From the Bois parking lot(1470m), follow the cross-country skiing tracks towards the east until Laisonnay (1570m). Then take the refuge trail to the north, on the right of Py stream. The slope becomes steeper as you climb. Be careful of snowslides coming from the Mollards corridors. Around an altitude of 1800 meters, cross an exposed sequence in S4 to reach the upper, more gentle part of Vallon du Py. Continue it (North) for 1.4 km until the Plaisance refuge located on a small plateau at an altitude of 2170 meters. It takes 2h30.

2°) Via La Plagne ski area: On the Chiaupe glacier, you reach the top of the Col ski lifts. Cross the line of the ridge to the east and via a 50 meter sequence in S4, take foot on Cul du Nant glacier (not very crevassed). Reduce the right bank of the glacier towards the SSE below a rocky side. At spot elevation 2619 meters (small plateau), follow the Laisille hollow to the SE. AT the narrowing at spot elevation 2479m, descend the S3/S4 slopes to the right until the plateau of the refuge. It takes 1h.

Climb to Dôme des Pichères : Go up the NW slopes above the refuge and pass a large rock band on the right which dominates the dale (2372m). Follow gentle slopes to the NNE to reach the edge of Plan Sery (2458m). Head NE. A short sequence in S3 leads to the foot of “Grand Tuf” (remarkable rock, 2813m). Follow the long southern ridge as best you can to take foot on Pichères glacier around 2900 meters, after the flat area of “Pas de Genet”. Depending on the conditions (slopes liable to the wind-slabs, SE exposure), follow on the left the water division line (narrow sequence in S3/S4 around an altitude of 3100 meters) to reach the summit via a long NW slight slope. Or traverse the glacier to the NNW by rather unrelenting slopes. Pass under two small rock barriers then to turn on the left (WNW) to cross a last small steeper slope (S4). Sixty meters under the summit, the slope becomes gentler again. It takes 4h.

Descent: Via the last climb option. Descend completely east (S3/4) and, at 3100 meters, traverse to the right (S3) to reach the southern ridge and the common climb route. It takes 3h to Le Laisonnay.

1°) Via the NE ridge of Dôme des Pichères then Plan Richard dale: From the summit, follow the NE ridge of Pichères. At 3100 meters, take a 100 m slope on the right which leads to an intermediate flat area. The head NE again to reach Col de Alliet (2910m). Under this pass, descend Plan Richard dale completely to the south. You reach the lower slopes by following the right bank of the stream under Mont Blanc de Peisey. For a return to Laisonnay: at spot elevation 2289, go up Col du Plan Sery (2609m) to the SW. Reduce the southern slopes which lead to Plan Sery and the normal route (it takes 1h45 longer). For a return towards Peisey-Nancroix: at spot elevation 2289, follow the water-course towards the left to reach Entre-Le-Lac refuge (2146m). Then take the long plateau of Plan de La Plagne, on left bank of the lake bearing the same name. At an altitude of 2002 meters (Rèbe shelter), follow the GR5 path. At spot elevation 1916, the route faces west. After “Lanches de la Rèbe”, you reach the Rosuel refuge (PNV, 1556m). Cross the dale via the cross-country skiing tracks to reach the road to Pont Baudin. It takes 1h45 from Entre-Le-Lac refuge.

2°) Via “Couloir Pépin”: Splendid and long descent on the north side of Dôme des Pichères (return logistics have to be planned or begin the route above Peisey-Nancroix, to the south of Bourg St Maurice). From the summit of Dôme, follow the ridge up to an altitude of 3150 meters and descend on the left. The start is easy but the slope quickly steepens to reach S4, the exposure is maximum. At the altitude of 2950m, you arrive at the junction created by a rocky shoulder. Take the right branch (east) and cross a short sequence of S4 +, exposed on hard snow. The left branch (west) is more unrelenting and boxed in (D +, 550 m at 40°). Descend 200 meters by still unrelenting S4 slopes . After a rocky narrowing, the slope widens and becomes gentler. You reach Plan de Pépin to the NW (alt. (2,000m). Based on the likelihood of avalanches from Grand Nant in the corridor, follow the base of this corridor or its right bank via a trail in the shrubs. At the cross (1722 m), return to the left towards the bed of the torrent by following a side moraine. You reach the hamlet of the Lanches via a broad slope which cuts the cross-country skiing loop several times. On the road, you reach the Pont Baudin (1471m) on the left. It takes 2h30.

The Plan Richard is NE then south, W above Plan Sery. The end of the return towards Peisey-Nancroix is NW. Couloir Pépin is northern facing and exposed to powder avalanches in winter, and wet sluffs in spring (at the end of the route).